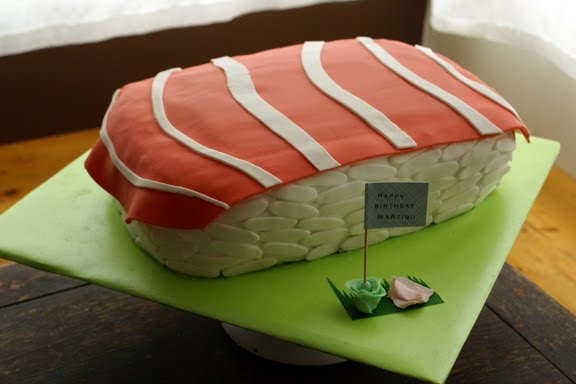 I’ve come to the realization that, apart from making beautiful little artful cupcakes, making cakes that look like other types of food is one of my favourite Coco Cake things to do. (See: hamburger cake, pizza cake, fish cake…) There is just an inherent sense of comedy and whimsy in this concept that I find really hilarious and satisfying! The “salmon nigiri” cake is no different– I was chuckling the whole way through while making this, and was excited to take on this new project. I ended up making it monstrously large by accident, thus undercharging for it, but I have learned for next time the amount of time and labour involved in this one! So here goes, for all my Coco Cake friends and fans:

THE MAKING OF THE SALMON NIGIRI CAKE! by Coco Cake! 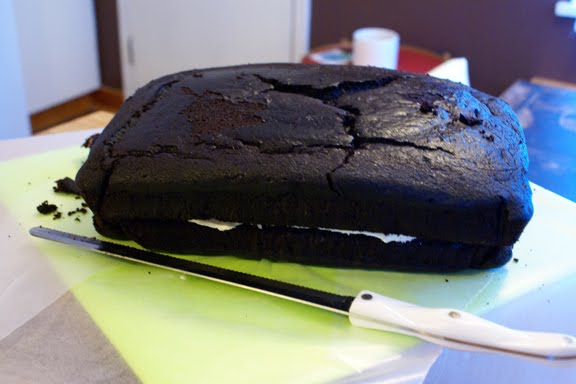 I baked two rather large dark chocolate sheet cakes! So I began by filling the center, then began carving the edges to even out the layers and to make it more smooth and nigiri-like. I covered a large piece of cardboard in nice green paper for my cake board! I thought the green would be a nice contrast to the final product, the red salmon topped cake… 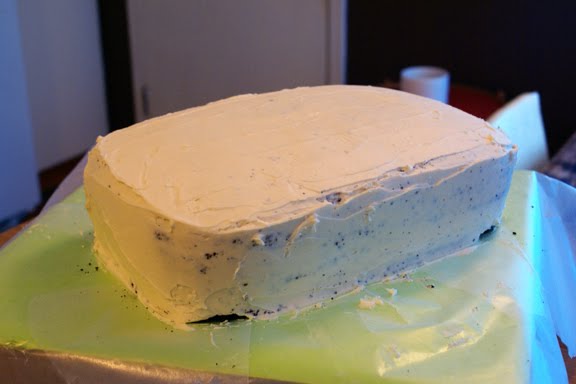 I did two coatings of vanilla buttercream: First the crumb coat, and then another on top of this one… I tuck wax paper under the cake while frosting it so the buttercream doesn’t grease up the nice green-paper-covered cakeboard! 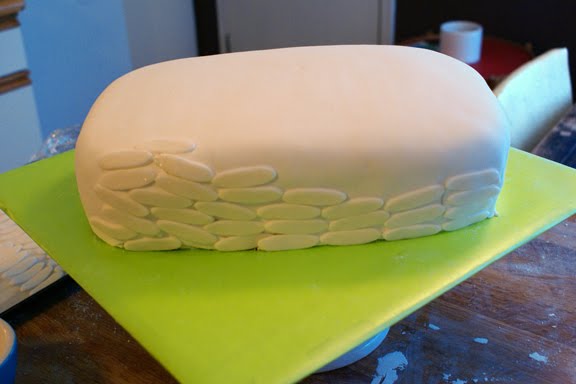 Next: I commissioned my husband to help me roll out this huge piece of white sugar fondant, enough to smooth over this big ol’ cake, as my right wrist is still killing me from excessive buttercream-piping and other such cake world hazards-what a guy my RT is!! Then I carefully rolled the fondant on top of my cake, patted it down and tucked in all the edges and made it all smooth. I had also cut out 300 pieces of “rice” shaped fondant, so I set to work brick-laying the rice on the sides of the cake! 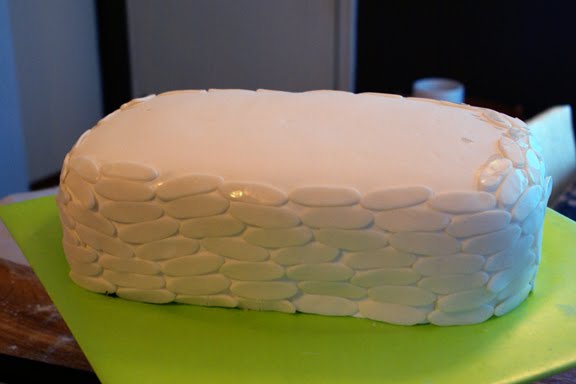 Finishing up the “rice”… 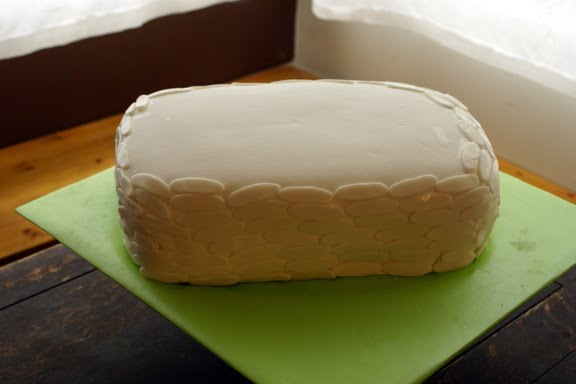 Ah yes, finally decent enough daylight for some natural light photos! (I started this cake verrry early in the morning)… I moved my cake over closer to the windows… heh heh… 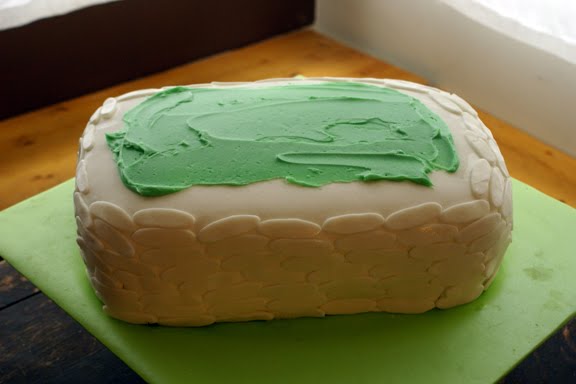 The secret comedy/sight gag inside the nigiri cake– just a little bit of green buttercream for WASABI underneath the salmon!! This is an unseen detail on the finished product, but my hope was that when the receivers of this cake cut into the nigiri, a little chuckle would be had with the secret “wasabi” ! Heehee! 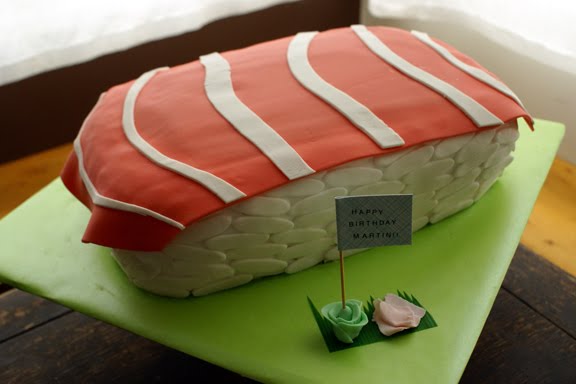 Et voila! The finished product! I hand tinted a large ball of fondant to make the “salmon” using a mix of red and orange gel colour, rolled it out and cut it to shape… I also made white fondant “strips” for the striations in the salmon… and placed it carefully on top! Next up was to make the extra details: wasabi rose and ginger… 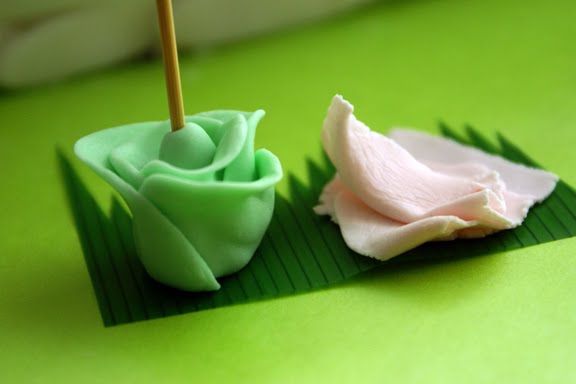 I made a green fondant “wasabi rose” and thin strips of light pink fondant “ginger”. I taped down that little piece of plastic grass (I actually had a packet of these grass papers from Fujiya that I had bought for my last year’s trompe l’oeil party!) Close-up of party flag and condiments… 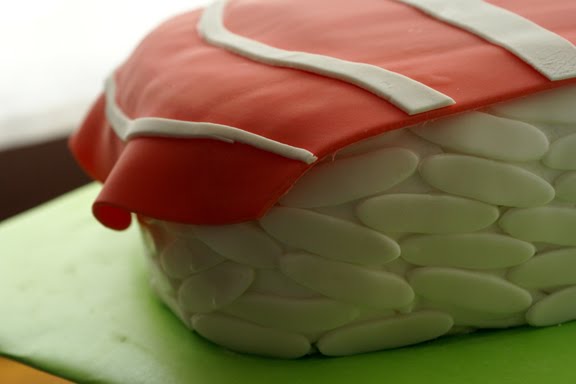 Detail of the salmon nigiri cake…

So there you have it! One thing that could have been added is of course a soy sauce packet, or little bowl of soy sauce! Which I will make for the next sushi cake… I like the comedy value of the fact that if that was my salmon nigiri piece, there is NO WAY that’s enough ginger slices or wasabi for me! But the dainty wasabi rose and ginger was too cute to make a huge pile of it!

Fun times at Coco Cake HQ! Thanks for tuning in, and Happy Birthday Martin! Hope you flipped out over your nigiri cake!

Totoro Week Gone Wild: How To Make A Catbus Cake

For The Love Of Pups: Yukon The Husky Dog Cake