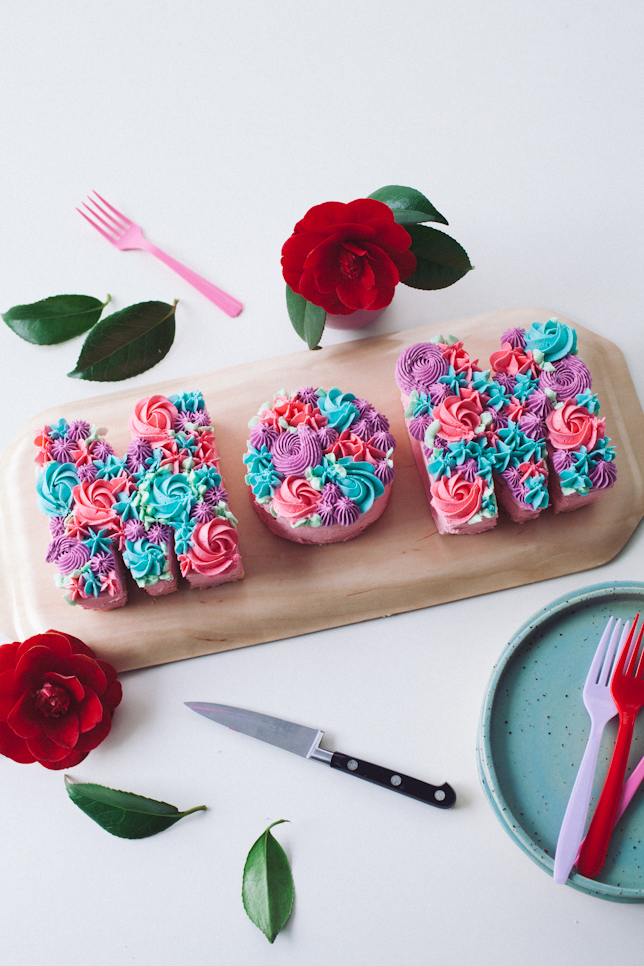 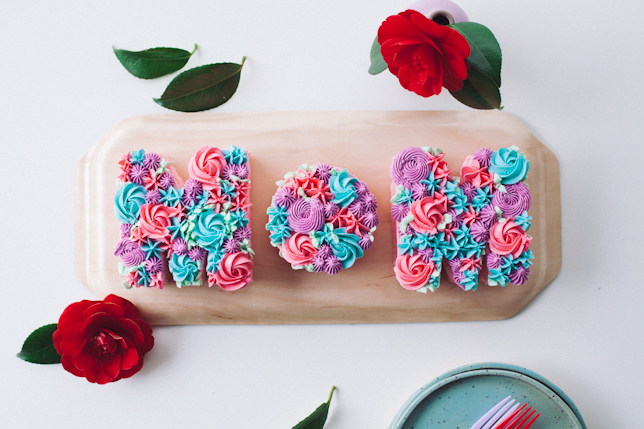 I was never certain I wanted to be a mom. It was hard to imagine it or picture it for me. I didn’t have adamant feelings either way – I kind of thought I would have a kid one day, but “one day” kept creeping up, and in my 30s I thought, shoot. I’m still not totally sure… but maybe I better start trying?? I wasn’t sure, on Christmas Eve morning, when I peed on the stick and two prominent lines appeared. I still wasn’t sure, waddling around at 9 months pregnant, my stomach housing a somersaulting alien. Then, birth day arrived, a hot summer day in August, announced with my water breaking at 6:30am, a splash of tinged-pink fluid on the bathroom floor. Hours later, waves of contractions and moaning and pulling at my hair. Quiet in-between moments in the bathtub at the hospital. Then, counting down from 10, like a football game – cheers from my team: “you can do this Lynds!!!”… gushes of fluid, an insane feeling of physical pressure in your lower body, an absolute and primal urge to shit out a watermelon  – and suddenly, that final push. Out came a waxy-covered baby with tiny bits of old-man balding pattern hair and what looked like a wide nose and cute little eyes, a little baby boy plopped onto my chest. I gazed at him in utter shock. Suddenly I was a mother. 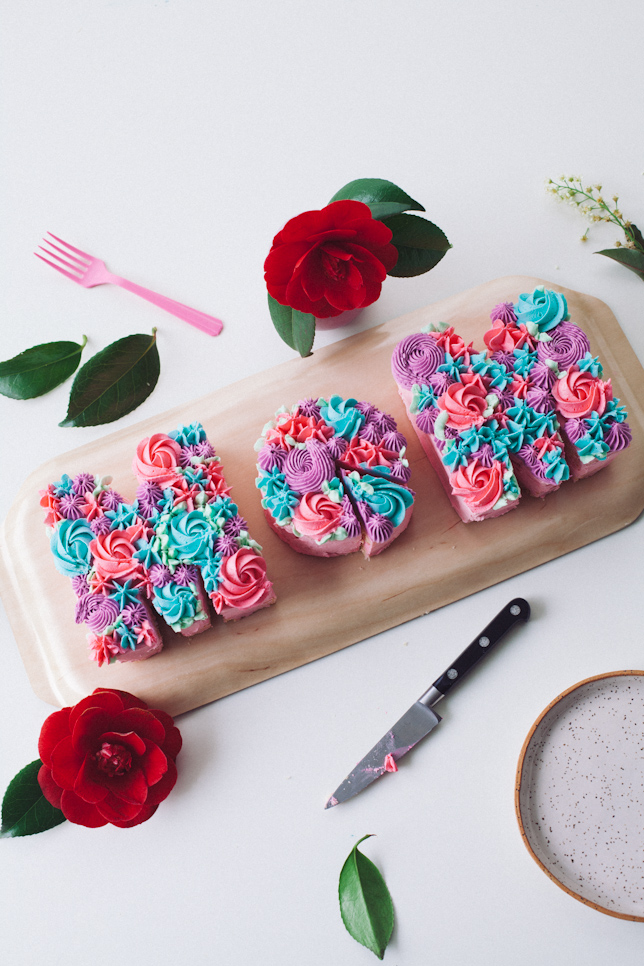 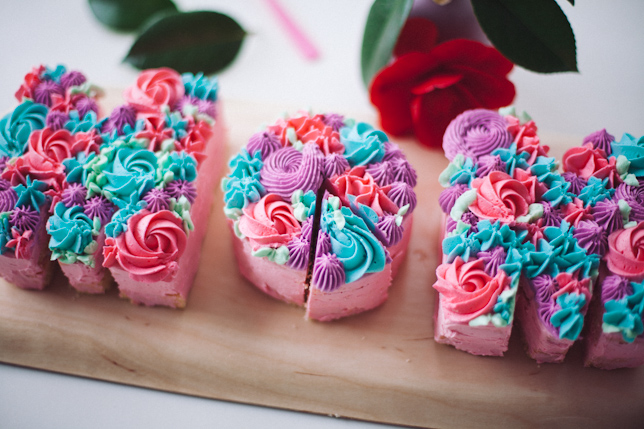 Almost 5 years later, life with my Teddy is wild and hilarious. He is a pretty easy guy to be around – he is sweet natured, funny and mischievous. It is the hardest thing yet the most amazing thing. I feel so lucky I get to be a mother. If I had waited a while longer, it could’ve easily never happened. 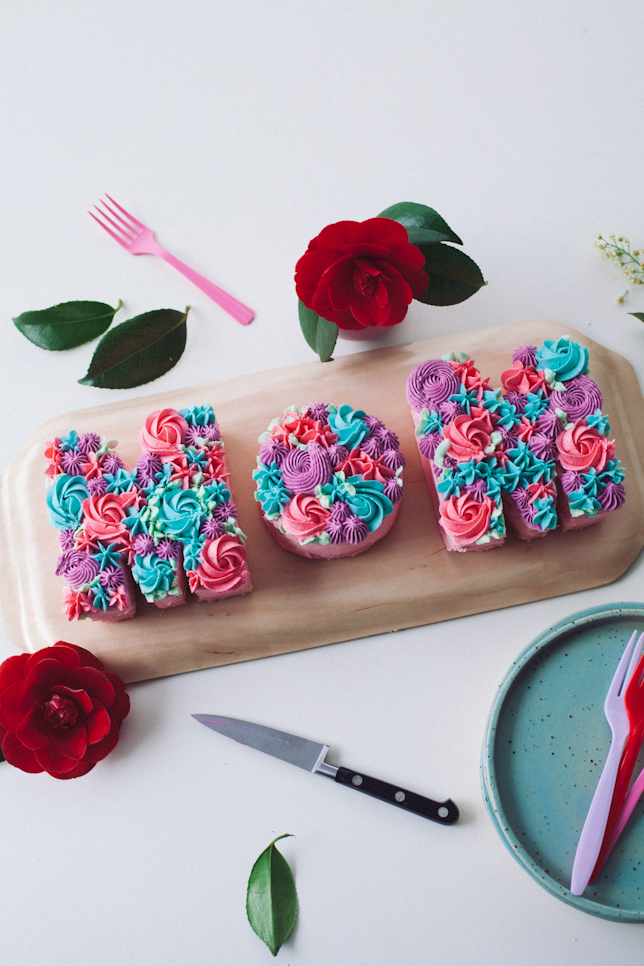 To make this buttercream flower typography cake, you will need one recipe for your favourite cake, such as this Martha butter vanilla cake. I don’t recommend a box mix for this, as you want a cake that has a sturdier crumb. You will also need 1 recipe for vanilla buttercream, and gel colour in a few shades to tint the frosting. Piping bags fitted with an assortment of tips will also be your friend: I used Wilton 1M, Wilton 4B and a small leaf tip. The sneaky thing about this buttercream flower cake is, there are no flower nails needed – just easy piped rosettes and drop stars. Thank you Milk and Water Baking Co for the cute piping inspiration! 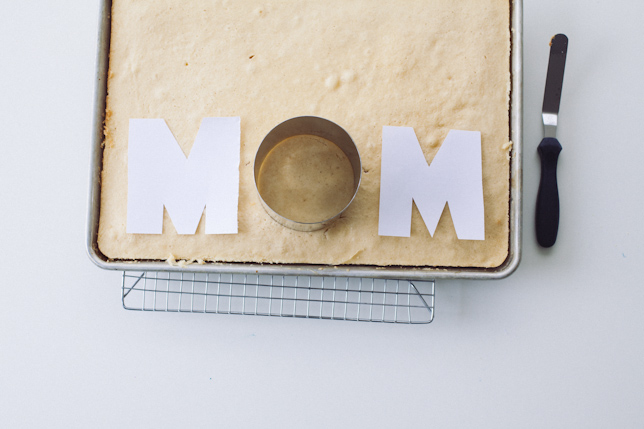 Make the cake batter according to the recipe instructions; prepare a 13 x 18 inch rimmed baking sheet by spritzing it with vegetable oil cooking spray and cutting a piece of parchment paper to size. Pour the batter into the prepared baking sheet and use an offset spatula to spread batter to edges. Bake for about 15 minutes, or until toothpick inserted in center comes out clean and cake is springy to the touch and has pulled away from the edges of the pan. Carefully run your offset spatula along the edges of the cake, then let cake in pan cool for 15 minutes on a wire rack. Transfer to the freezer to power-chill it. This will make it easier to trim out the letters, but be careful not to freeze the cake – you just want to firm it up. 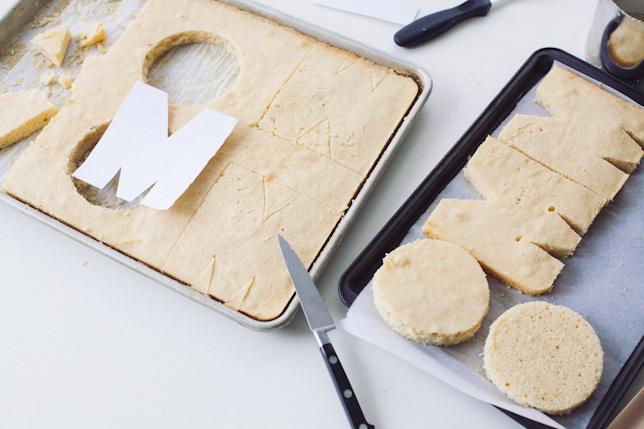 While the cake is chilling, make the vanilla buttercream from this recipe. Divide the buttercream in half; divide one half into three smaller bowls, tinting each bowl its own colour – blue, purple and green. Colour the remaining buttercream pink. Then, cut out a template for the letter “M” using a piece of paper – mine is about 5 inches tall. I used a 4 inch round cake ring to punch out the letter “O.” Remove the cake from the freezer and place template on top, trimming out carefully with a sharp paring knife. 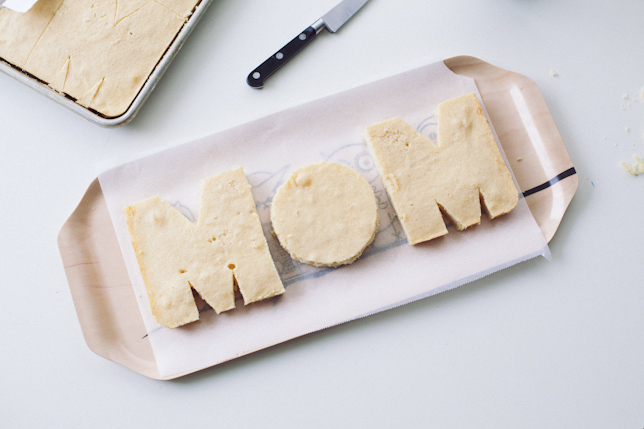 Arrange the first layer of letters on a piece of parchment paper. 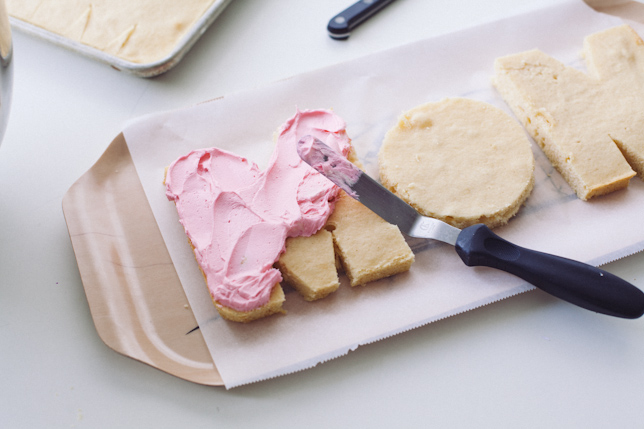 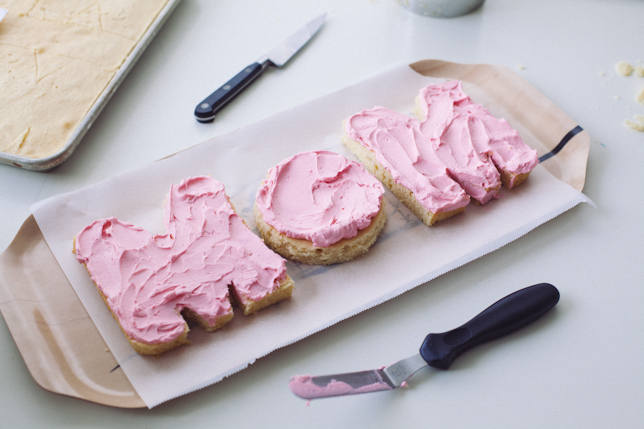 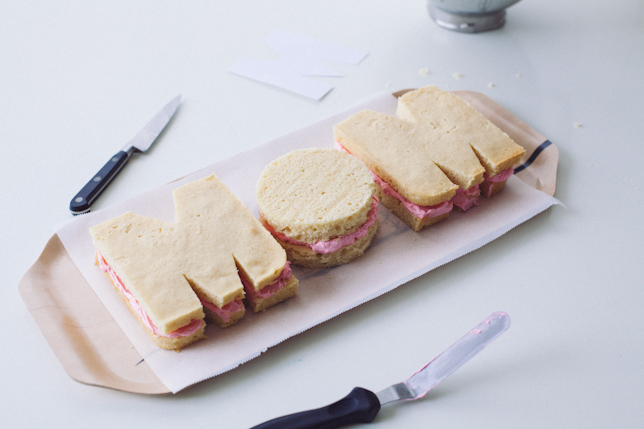 Place the second layer of cakes on top. 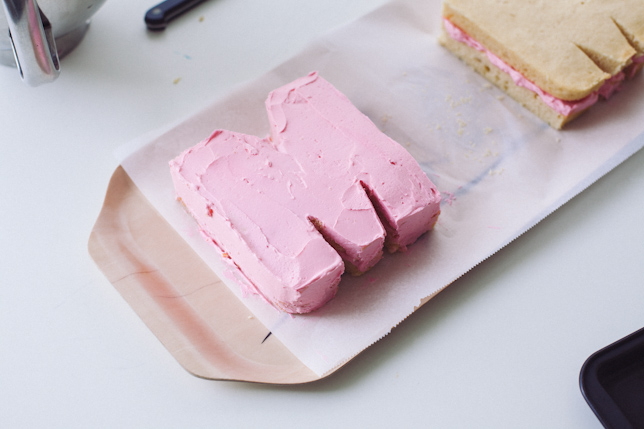 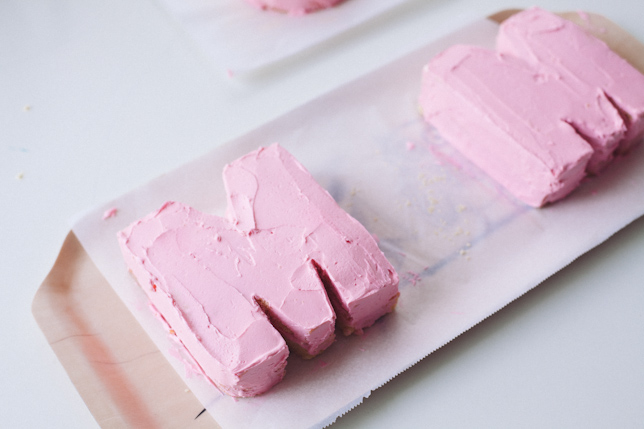 Frost the entire cakes in the pink buttercream. Once finished, place in freezer and chill for 15 minutes. 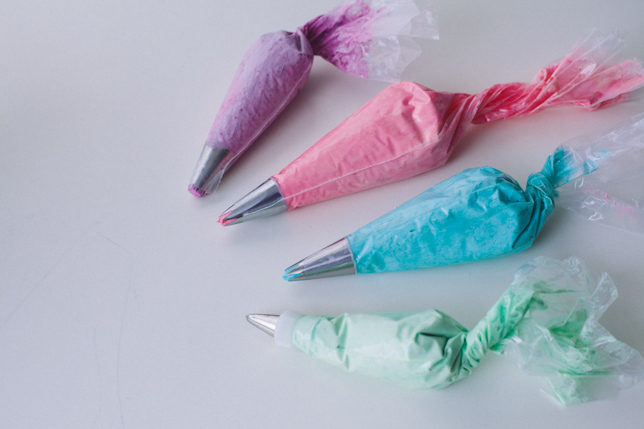 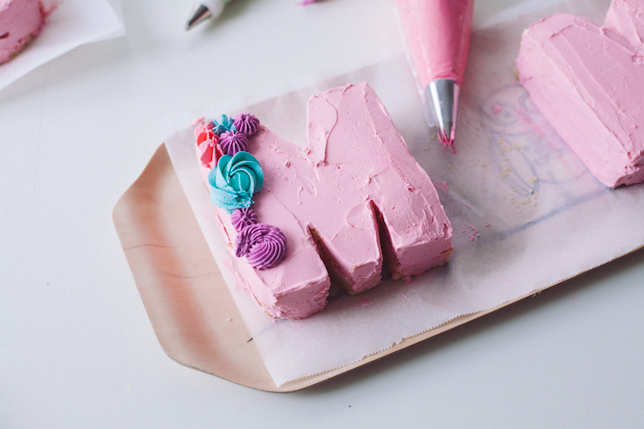 Drop stars are simple to make – squeeze the piping bag in a short burst, release then pull upwards. 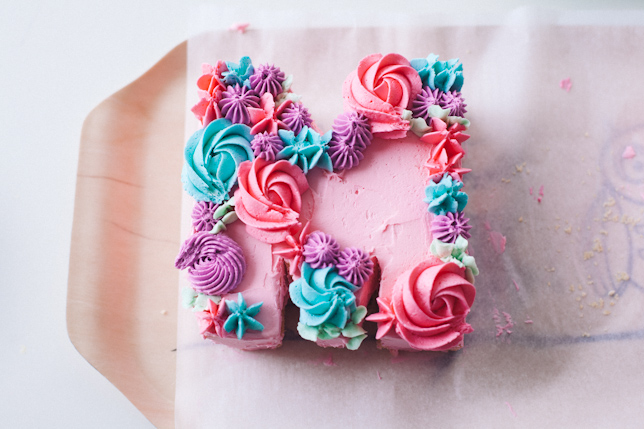 Rosettes are made by squeezing the piping bag and rotating counterclockwise in a a tight circle. 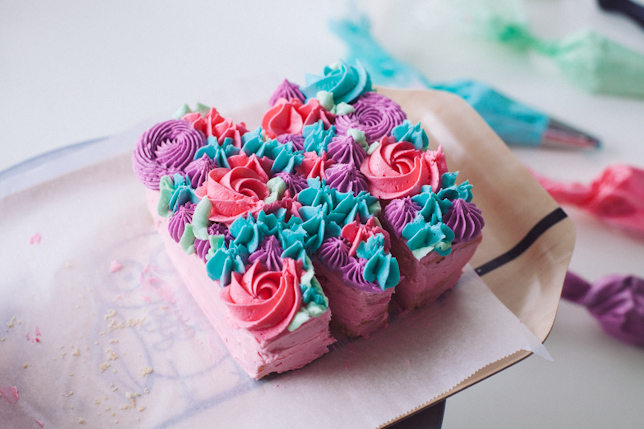 The piping bag fitted with the leaf tip is great for filling in any naked patches and adding bits of greenery to your buttercream flower patch. 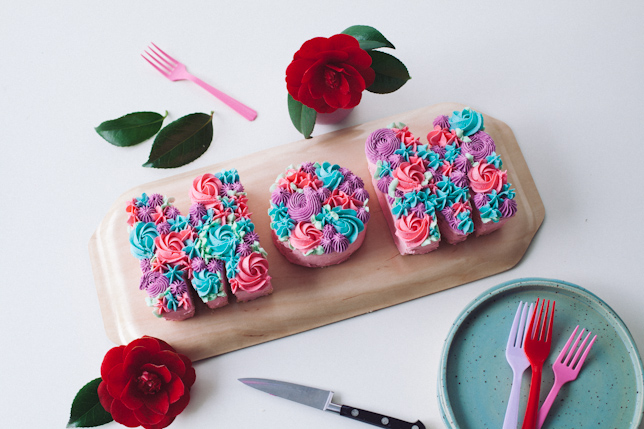 Crank some tunes or a podcast and start piping! HOT TIP: Once I finished piping the letters, I chilled the cakes in the freezer for 20 minutes to set the buttercream – then I used my sharp paring knife to trim a bit of buttercream floral overhang in the indents of the M’s – to define the letter shapes a bit more. You’ll want to do this when it’s frozen so the buttercream is solid and easier to pare. 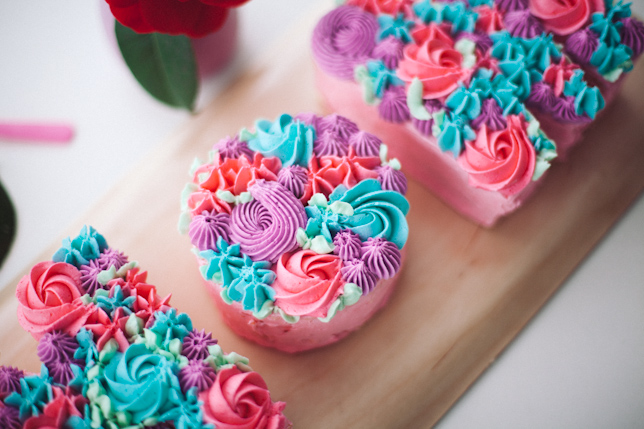 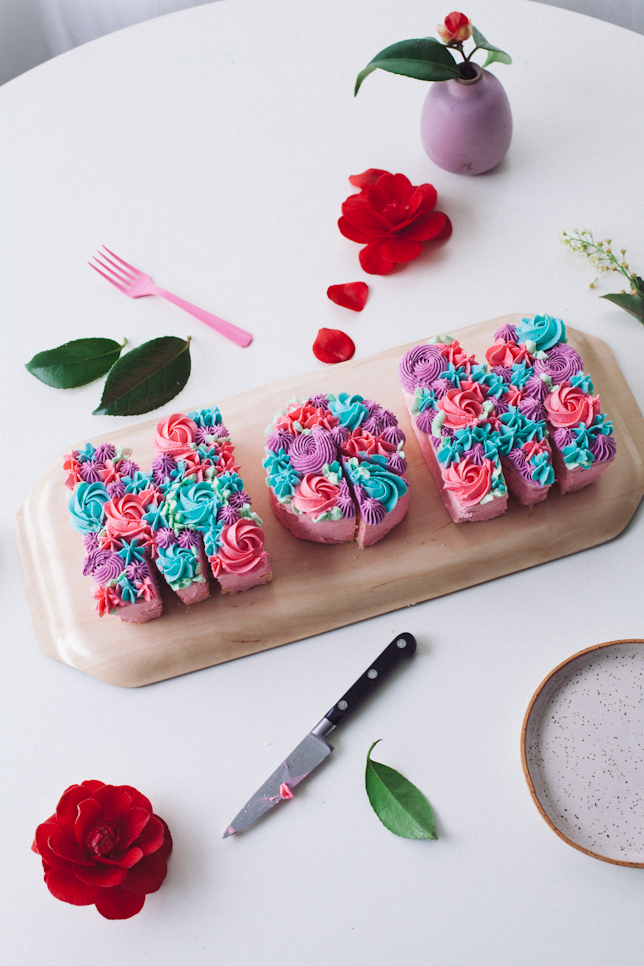 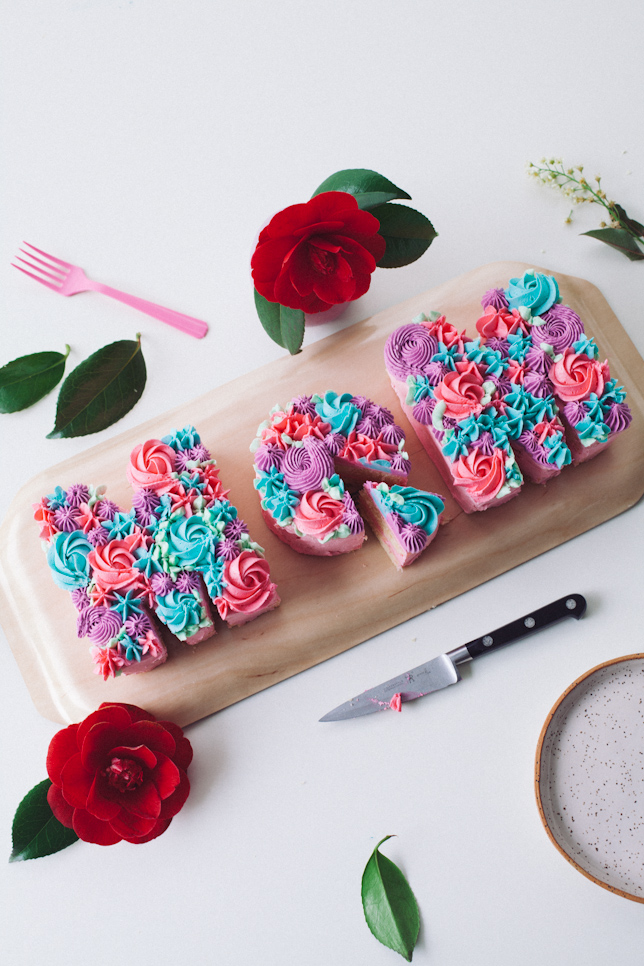 Now cut yourself a slice, mama! Or make this for your own mama, a favourite Auntie, or a strong female figure in your life, or someone who just wants to eat some freaking cake. This concept would also work as a monogram cake, a number birthday cake or wedding initials. 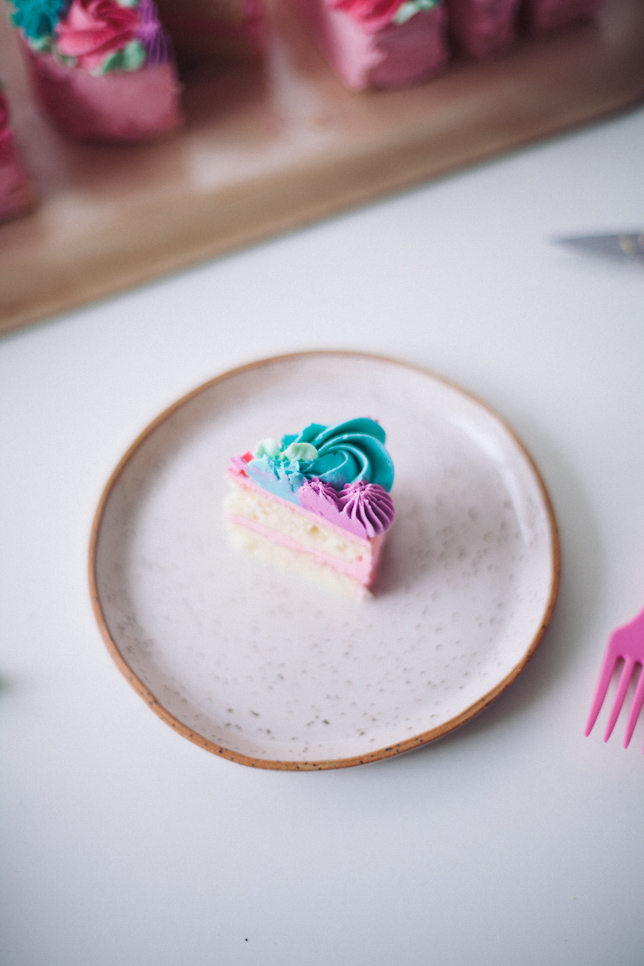 I also want to give a special shout out to my sweet friends Erika and Robyn – who are celebrating their first Mother’s Day with their adorable two month old baby Olympia! I am so happy for you guys and your amazing little family! Strong as a muthah. xo Lyndsay