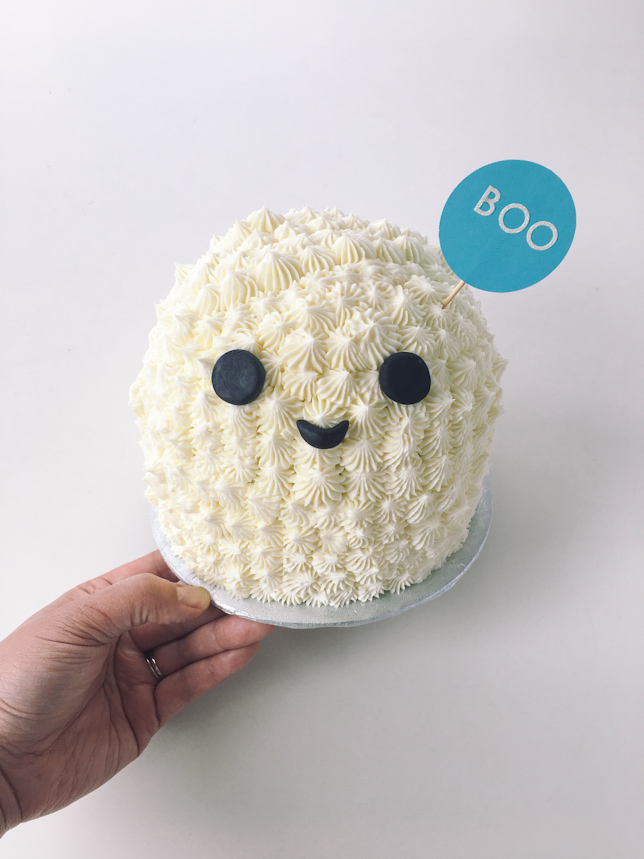 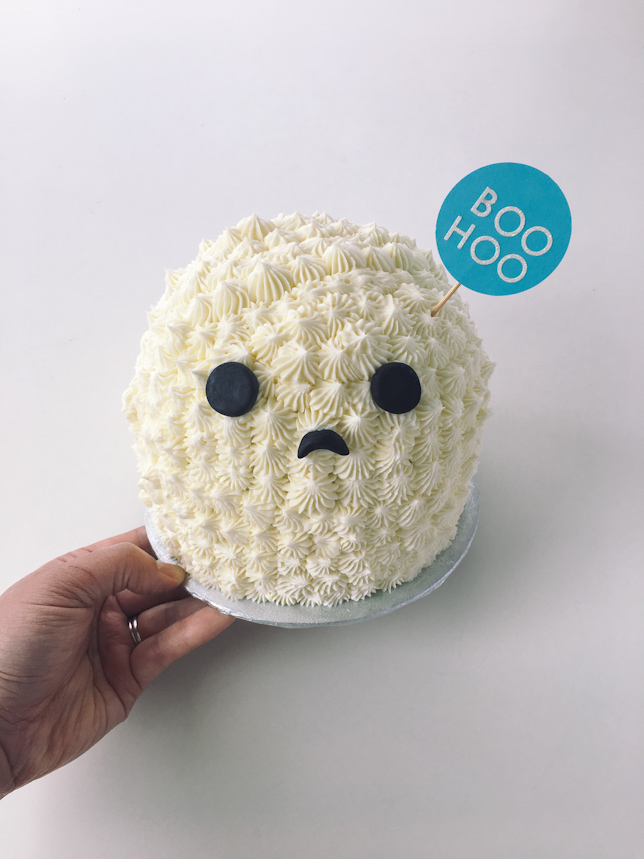 Sad ghost cake! Hallowiener is upon us so I thought I’d post this ghosty guy I made in the hot drippy heat of July, for no reason at all, except, whoops it’s October and I have an accidental ghost cake to post. I’ve been lite-googling “dinosaur mask paper mache” because I was thinking of being a silver-themed Ultraman-ish villain this year. Mostly because I feel like wearing silver, because I am jealous of Teddy’s silver gloves. Also, I love the kids’ space costumes in this post from Tell Love and Party – SILVER! GLOBE HEADS! Last year I attempted to be Grapes but I messed up my costume – after pinning on a whole bunch of purple balloons onto my purple silk vintage shirt, I couldn’t get the damn shirt on afterward, an engineering fail. The year prior, I went as CAKEHEAD which was pretty cool – “cake in a box!” This year Teddy is so pumped to decorate our house all Halloween-ish. So far we have a fake bloody hand given to us by our old neighbours, hehe. Side note: this ghost cake made me think of none other than Demi Moore and Patrick Swayze in the racey penile wet pottery scene in Ghost. This movie came out in 1990 and I totally saw it in the theatres (mom?? I think I was too young). I was such a little innocent that I don’t remember much about the “scenes of a sexual nature” but the final scene where the BAD GUY IS GUTTED BY A VERY LARGE AND INSANELY SHARP SHARD OF BROKEN GLASS and his soul is dragged to hell by rather terrifying black shadows is emblazoned upon my memory. I also remember thinking, when the credits rolled: when Demi sees Patrick again she is going to be an old lady (although she has proven she does not really age!) and he will still be a handsome young man.Time to watch GHOST again, 27 years later!! xo Lyndsay