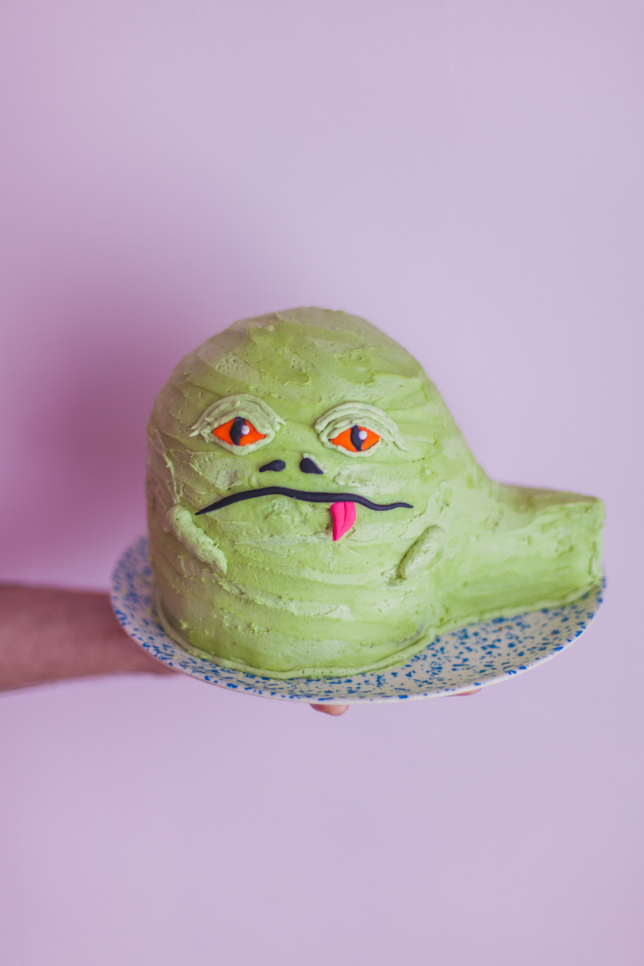 Last minute Jabba the Hutt cake for Star Wars Day, aka – MAY THE FOURTH BE WTH YOU. We are in deep, deep Star Wars obsession around our house these days – Teddy is six years old turning seven. Teddy has been anticipating May 4th for months now – so we had a little Star Wars party (which turned into maybe almost birthday-party-calibre… oh dear)… I was excited to try something new to bake, and well, I’ve always been fascinated by the diabolical Jabba the Hutt (and his greasy, cheese-dripping Spaceballs brother, Pizza the Hutt)! Jabba, the giant slug lord gangster who chains up Princess Leia as his slave – but she gets her revenge by choking him to death by the very chain he enslaved her with… jeez, Star Wars is dark. So, I drew up a Jabba sketch with my cake pans in mind and came up with this Jabba, which could easily be turned into just a classic SLUG cake, if the occasion happens to call for it. SLUG PARTY! 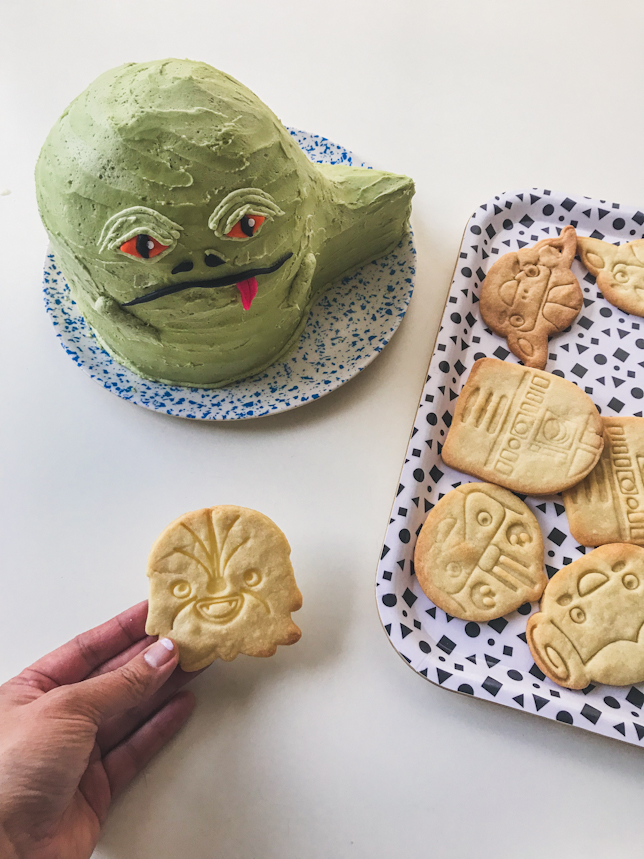 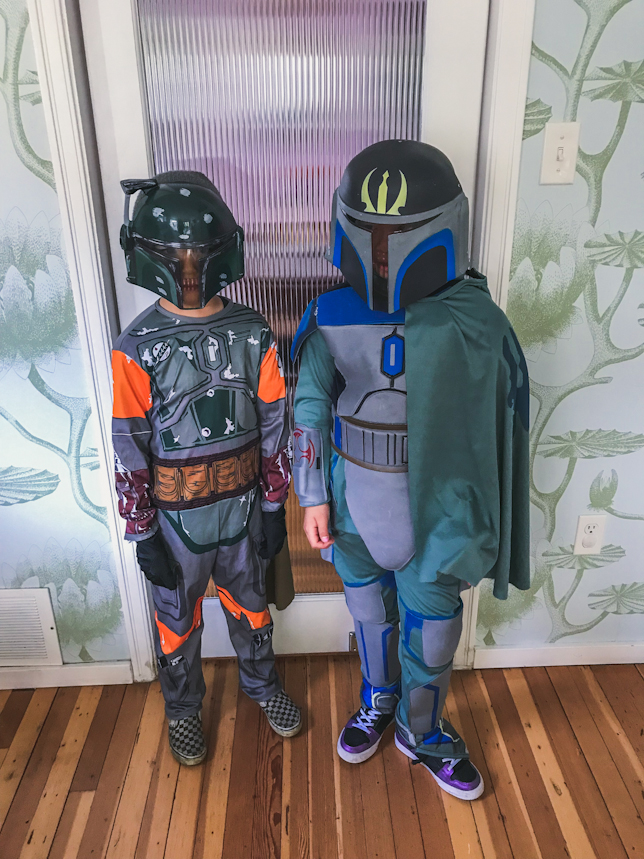 Teddy and his cousin Brookie! (aka Boba Fett and Pre Vizsla – I had no idea who these characters were but now our house is GRIPPED by Star Wars) 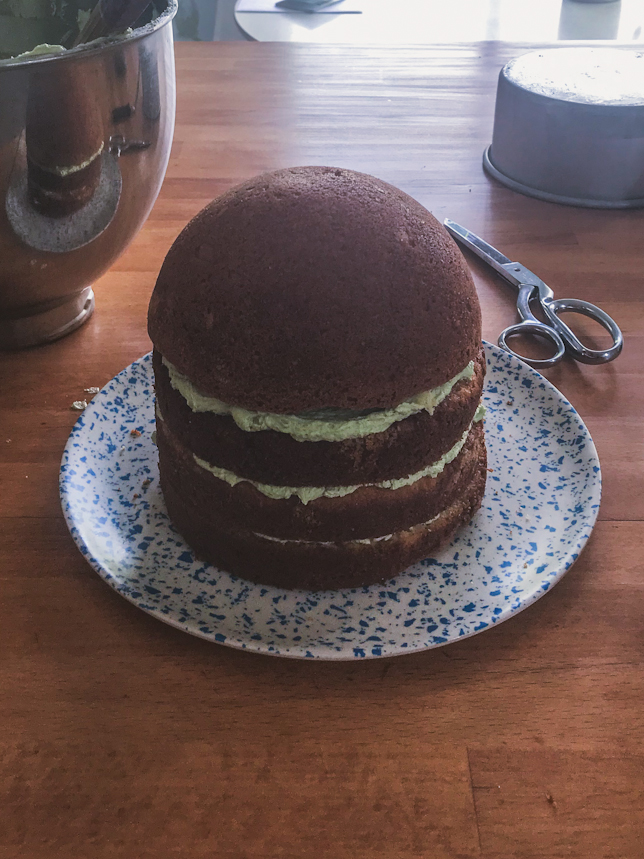 I started with dividing a lemon cake batter into two six by three inch round pans, and one half of my Wilton sports ball pan (I’ve used this for so many cakes and not ONE of them has been a sports ball, hehe!). I then trimmed my six inch round cake layers in half, and reserved one for cutting into triangle-like shapes to mimic Jabba’s tail. 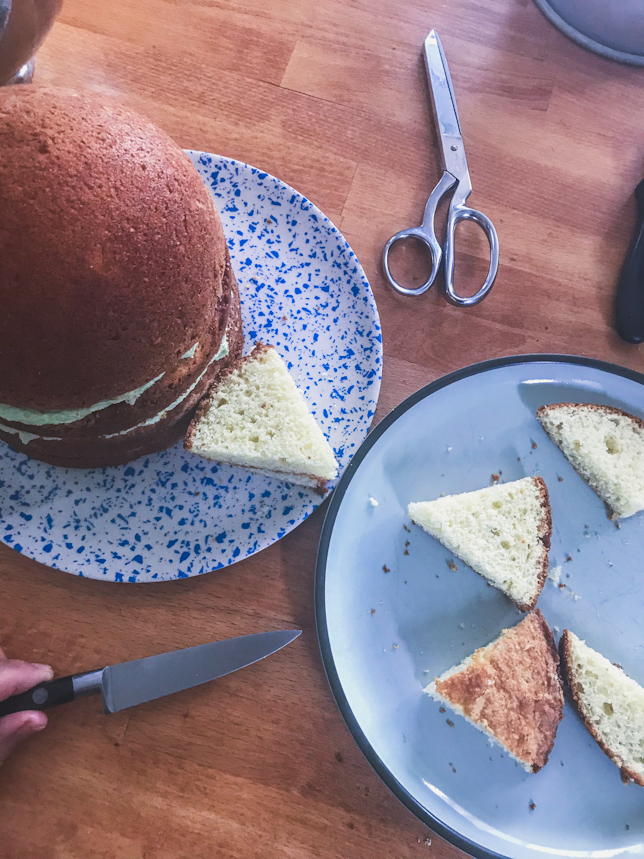 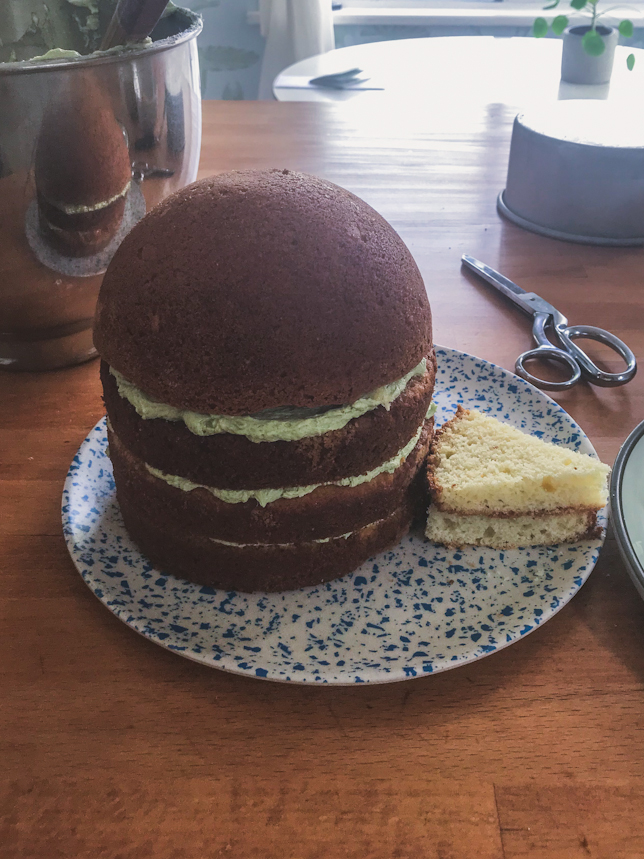 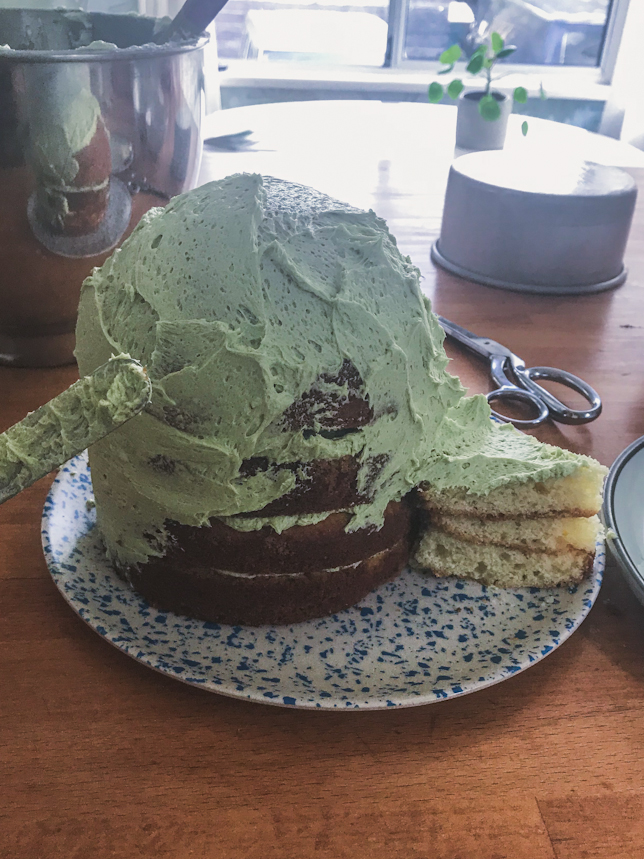 For the tail, I layered three triangles on top of each other – and built up the frosting to give it a curved shape. The frosting is a lemon creamcheese frosting, tinted lightly with leaf green and brown gel food colours. 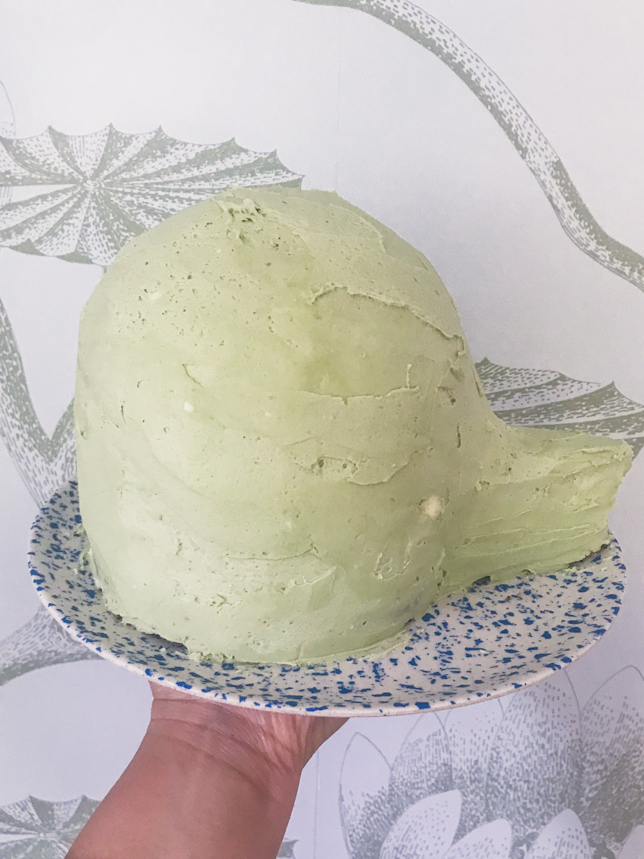 This is my second coat of frosting – I did the first coat, power-chilled it in the freezer, then added another layer! 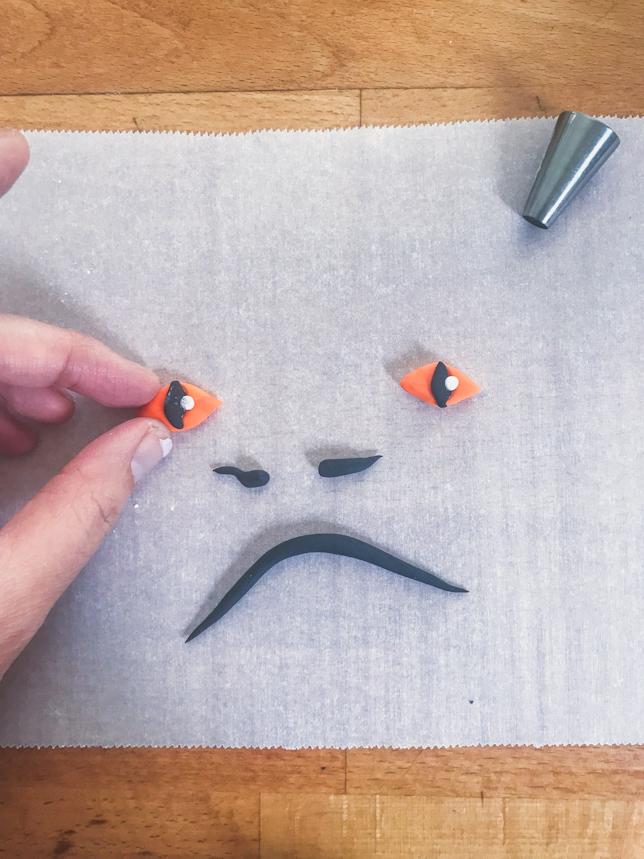 Next, I worked on Jabba’s facial features! The snakey eyes, nostrils, long mouth and gross tongue are key to giving him the Jabba look. More importantly, piping the wrinkly lines around his eyes really gave him the Jabba look! I used a small open circle tip for the eye wrinkles. 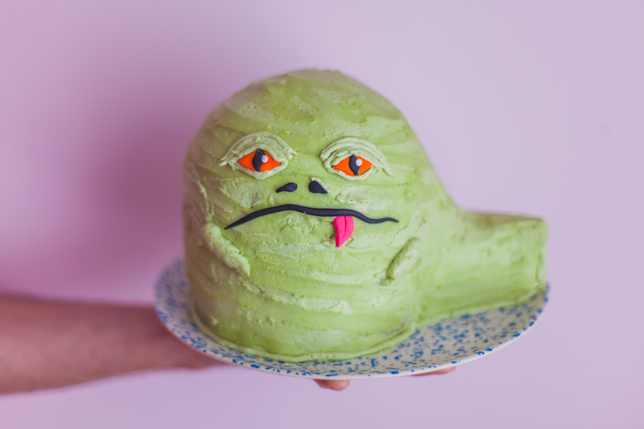 For his stubbly arms, I used a medium open circle tip and piped it right onto the cake (it took a few tries to get it in the right place!) If I ever make Jabba again, I’ll experiment with piping the whole cake with the wrinkly lines – Teddy is on an anti-buttercream tirade these days so I wanted to do as little frosting as possible! :P 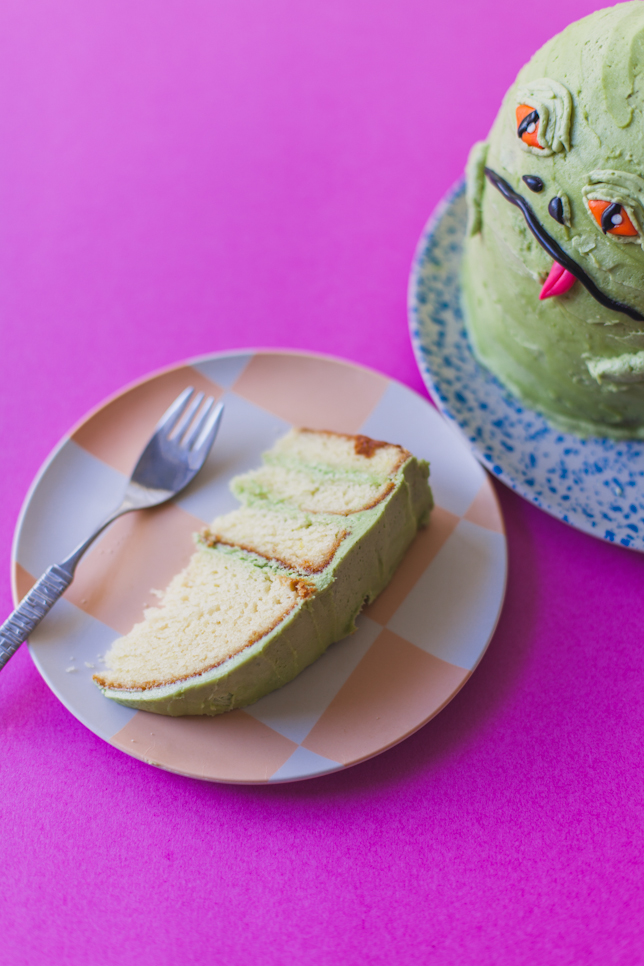 Slice o’ Jabba the Hutt cake!! Serve him up with some blue milkshakes and Star Wars sugar cookies! We also did a pool noodle light sabre craft and we watched Revenge of the Sith, which was INTENSE. Yikes. Definitely screen it before showing it to your younger and/or sensitive kids, something I wish I had done, oops. However, Teddy didn’t seem bothered by it, even though there are some ugly scenes (Chancellor Palpatine is EVIL, FYI! I loathe him and his horrifically freaky face, he destroyed Anakin and Padmé’s lives!!!) including the gruesome fiery almost-death of Anakin, who then gets a brutal-looking operation which turns him into Darth Vader… I think I was clearly more traumatized by this movie than my six-year-old! 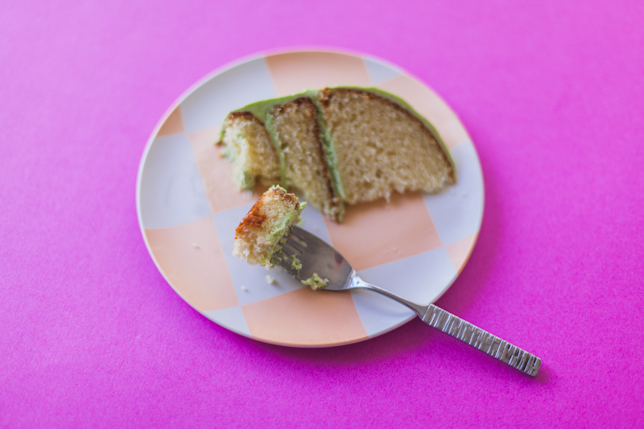 Hope you enjoyed this simple Jabba the Hutt cake tutorial! MAY THE FOURTH BE WITH YOU! xo Lyndsay