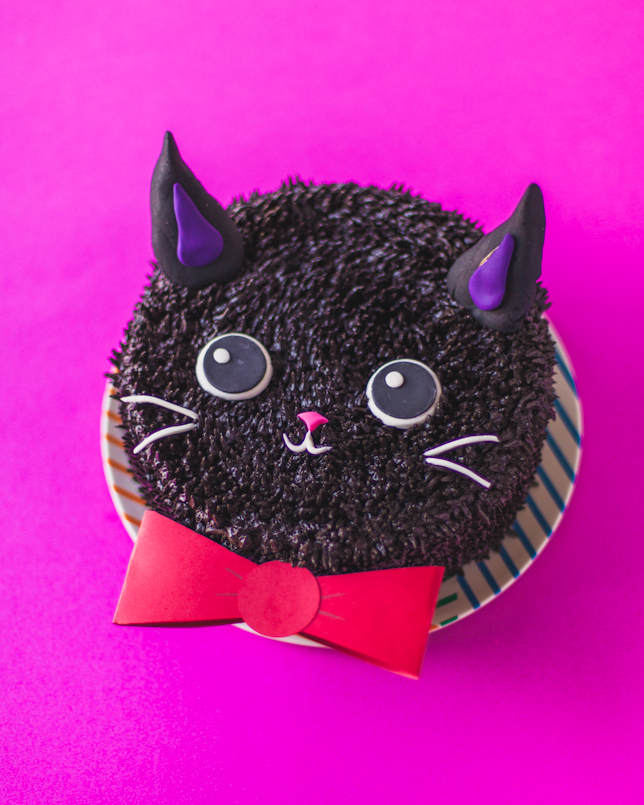 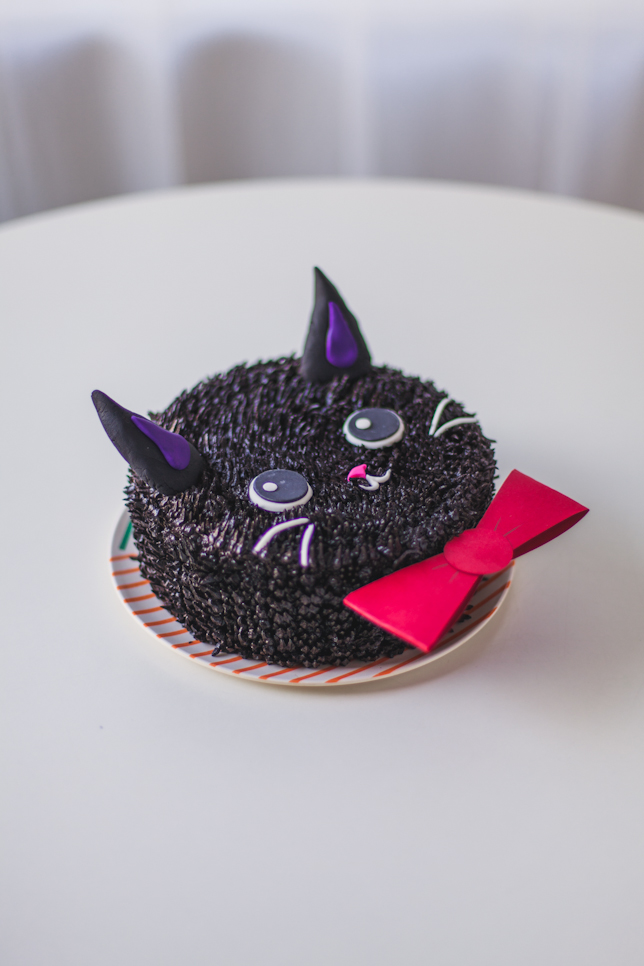 It’s #TOTOROWEEK – also known as the week leading up to Halloween, as created by my blog bestie Steph of I Am A Food Blog! For the past several years, we’ve been making Totoro themed food and cakes just for the Totoro heck of it. Phewf, I got in just under the wire with this kawaii Jiji The Cat furry buttercream cake! I’ve been wanting to make a black cat cake ever since we got our sweet beloved kitty, Rex. Rex is five years old, and he’s from the local SPCA. He was a mangy skinny thing when we first met him – and he was ravaged with fleas and patches of missing fur all over him. Now he’s a slightly plump, sleek little panther who is almost brutally loving. Like he sleeps on my neck, or on the top of my head like a hat, or on top of my legs like a leg prison, and he’s always purring. You can scoop him up like a rag doll and he never complains! He is a sweetheart. Teddy made him a perch out of cardboard boxes and a glue gun – Rex loves it, though I am scared that it may not be the sturdiest, lol… Jiji the cat is not from Totoro, but Jiji is from Kiki’s Delivery Service, another Miyazaki film – so I gave myself some creative license! :P (I could also have made this into a soot sprite!) 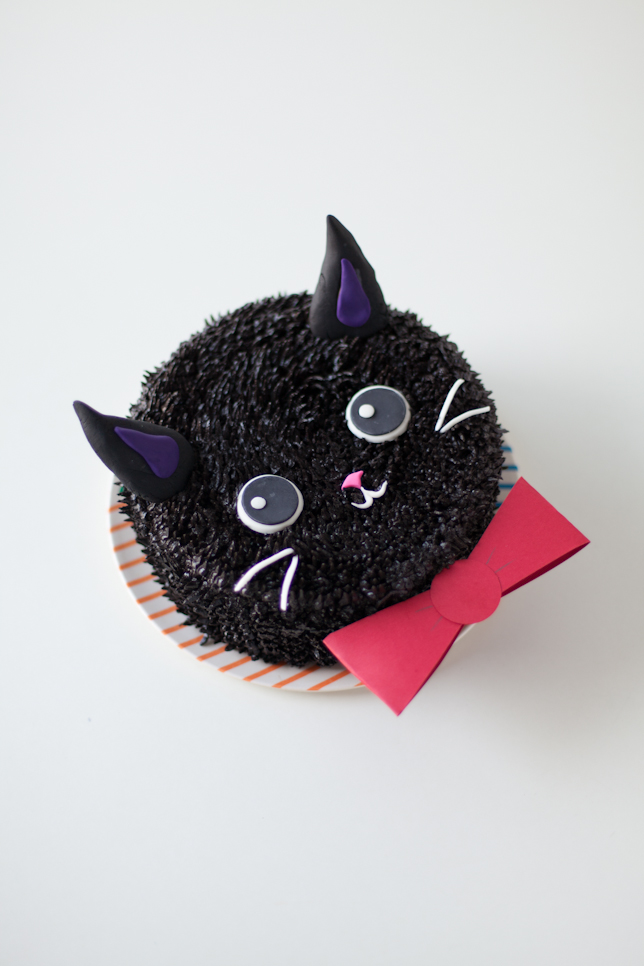 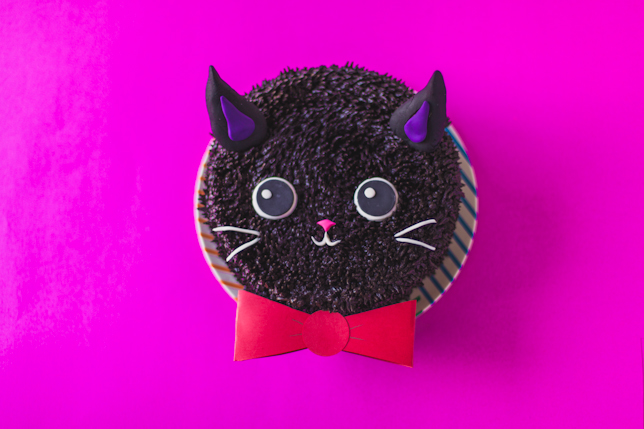 Have you ever made black buttercream? The secret is to use black cocoa powder. It has a slightly bitter and licorice-y taste in my opinion – so make sure to counter it with either melted, cooled chocolate and enough sugar. I also used maybe half a teaspoon of black gel colour – way less than I would normally have to use if I didn’t do the black cocoa powder! Another tip for getting your buttercream black is to let it sit for an hour or so to darken, even overnight. When I started piping Jiji he was a dark greyish shade, but he was a pleasant shiny black by the time I was finished photographing him! I didn’t really have a total plan for this Jiji the cat cake – the face I kind of made up on the fly, and I gave him DILATED PUPILS simply because I was worried you wouldn’t be able to see the black fondant eyes on top of the black buttercream! The bowtie was my albatross – I made it a few different times out of fondant, but then I thought it looked weird just perched on Jiji’s chin, like a red beard-bow goatee mashup: 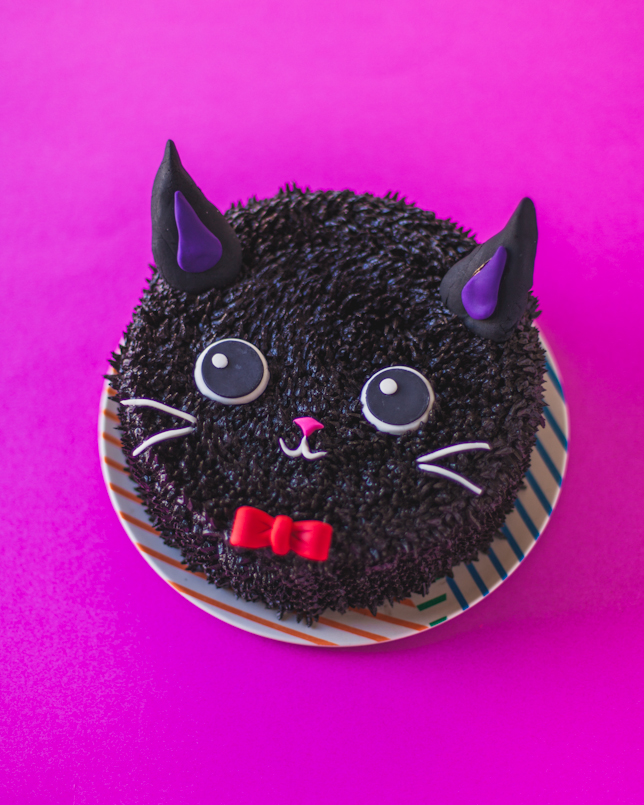 I dunno, what do you think?? So I ditched the fondant attempts… I thought about making a fondant topper to insert into the cake, but the size of the bow would’ve been too heavy and wouldn’t have anchored into the cake very well. CRAFT PAPER TO THE RESCUE! 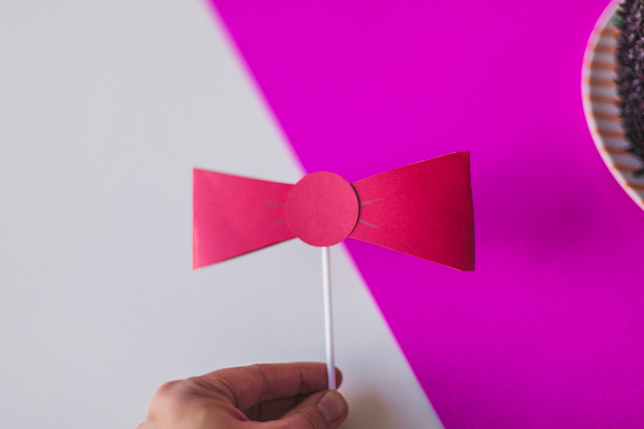 I cut out a long strip of paper, folded both sides to meet in the center, used scotch tape to adhere and punched out a little red circle using my trusty craft circle punch for the center. I taped it onto a thin straw (I will never buy plastic straws again in my life – GO GREEN – but I had these leftover from my wedding from 2007!) 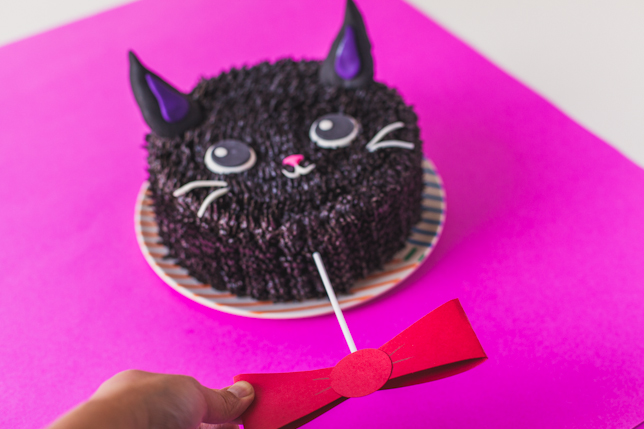 I inserted the red bow topper into the front of my kitty cake. 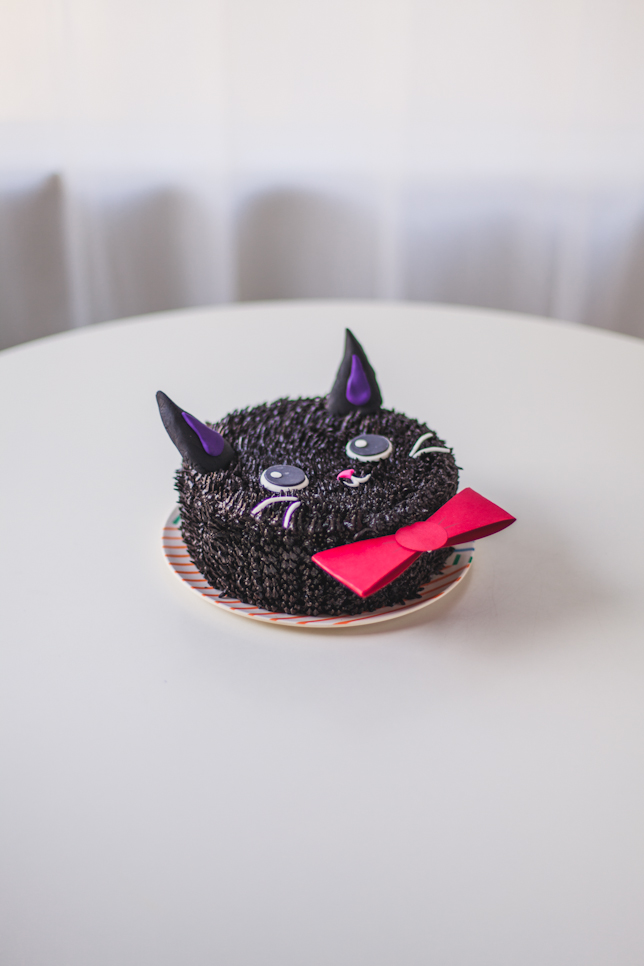 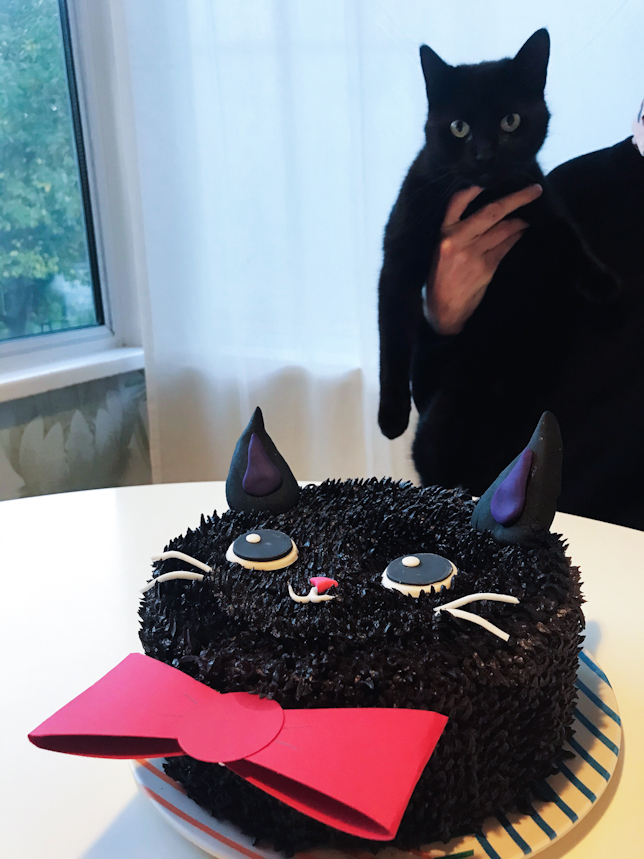 SUPER CUTE! I love how this furry Jiji the cat cake turned out! And LONG LIVE TOTORO WEEK!!!! (click on the “totoro week” tag below to see all the past Totoro week cakes!) xo Lyndsay