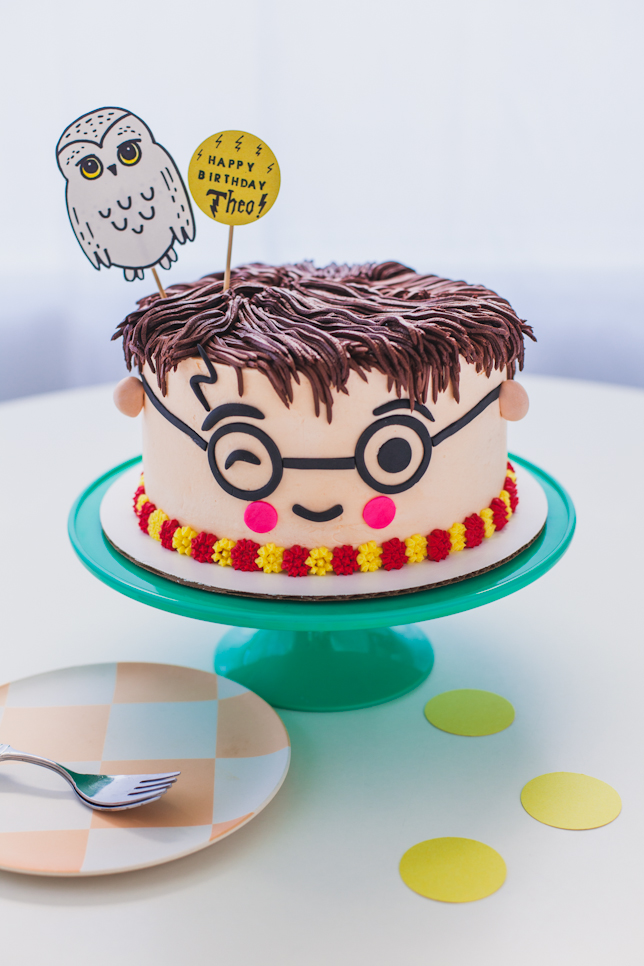 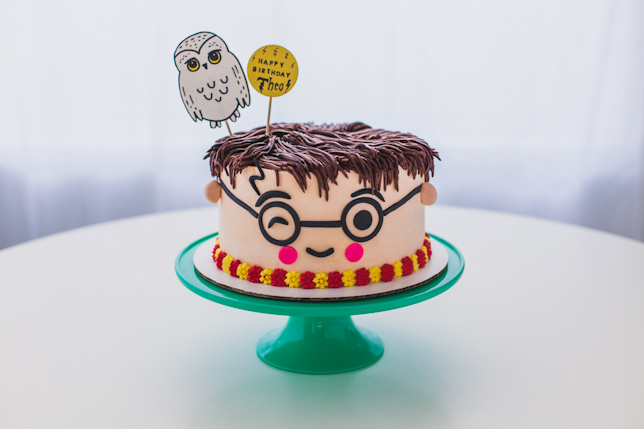 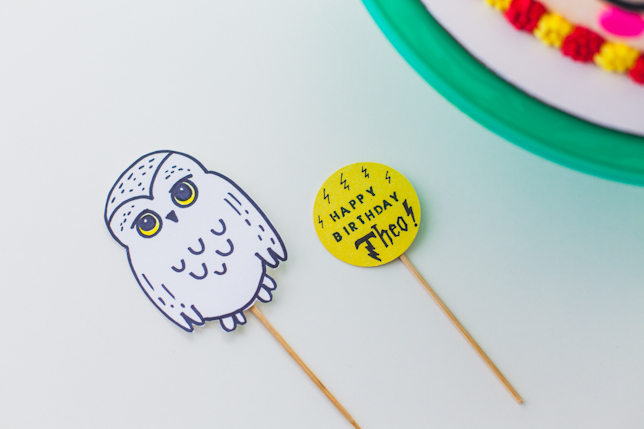 It’s my kawaii Harry Potter cake!!! I made this kawaii Harry Potter cake for my dear friend Mia’s son Theo’s seventh birthday. My journey to being a Potterhead has been, ahem, decades long. Almost twenty years ago my then-boyfriend Rich was plowing through the series (which, when I look back, was rather adorable) and he encouraged me to read them, insisting I would love it. I’ve always had an issue with crappy design. I LOATHED the very first book covers of Harry Potter – HP was too cartoony, the colours were heinous and too geared towards kids (I know it’s a kids book, lol). But, I started it anyway… and never got beyond maybe the first two chapters and just said FUGGEDABOUTIT Harry. Fast forward to 2018 – my mom had just finished the entire series and gifted a whole set of them to Rich and I for our wedding anniversary! I decided to give it another go. Even still, it took until Book 3 to really get into it for me – I would start and finish other books in between like a jerk. But I finally fell in love. 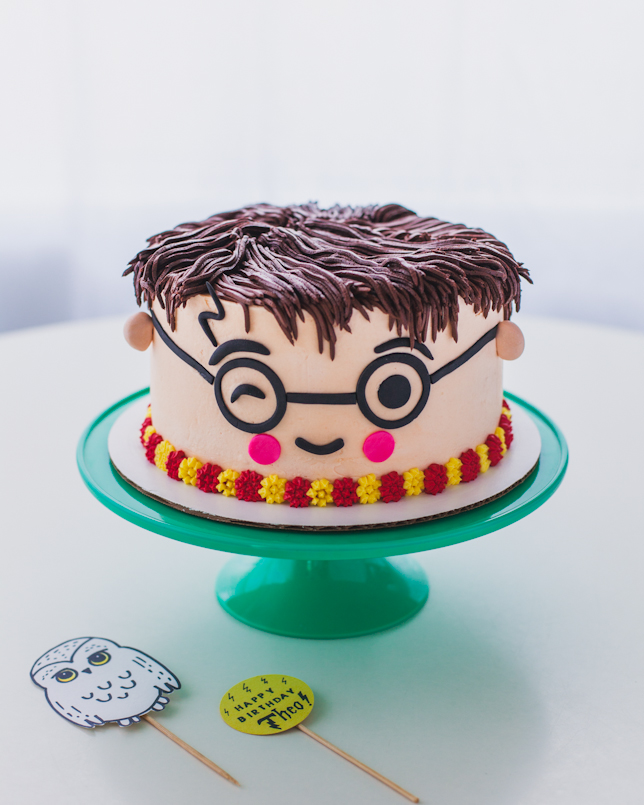 Harry is truly a hero. He perseveres through so much and grows up for the first decade of his life without knowing love. TRAPPED IN THE CLOSET y’all. His first trepidatious forays into friendship – and becoming an honorary member of the Weasley family… then, finding out Siruis is his stepfather and finally feeling like he has a father figure in his life and then … JK ROWLING, ya KILL Sirius?? But Harry continues on. I lost it when in Book 7 he visits the graveyard where his parents are buried. Then, when Harry sees his mom for the first time after he’s “killed” and she tells him how brave he has been… just sobbing. I am now reading the illustrated version of Book 1 with Teddy and he is LOVING it. 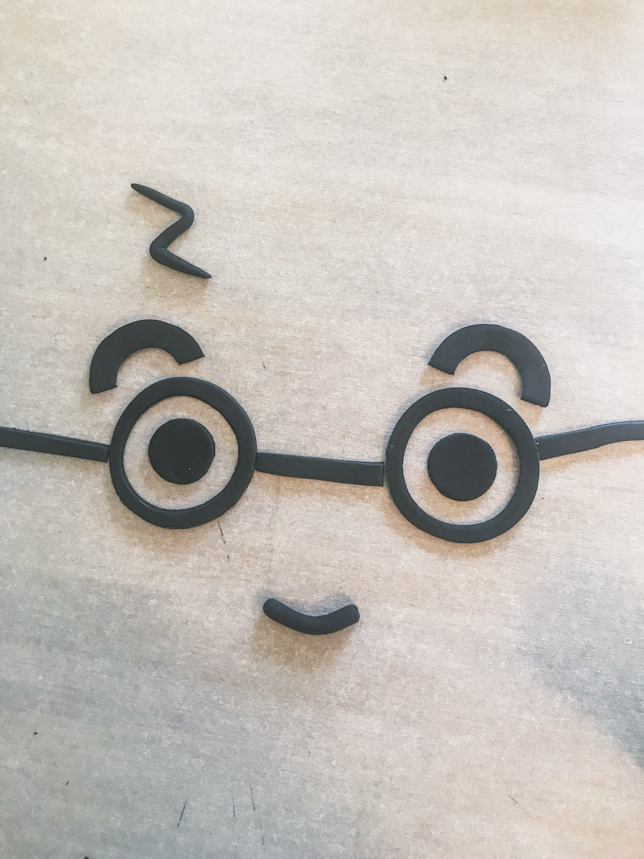 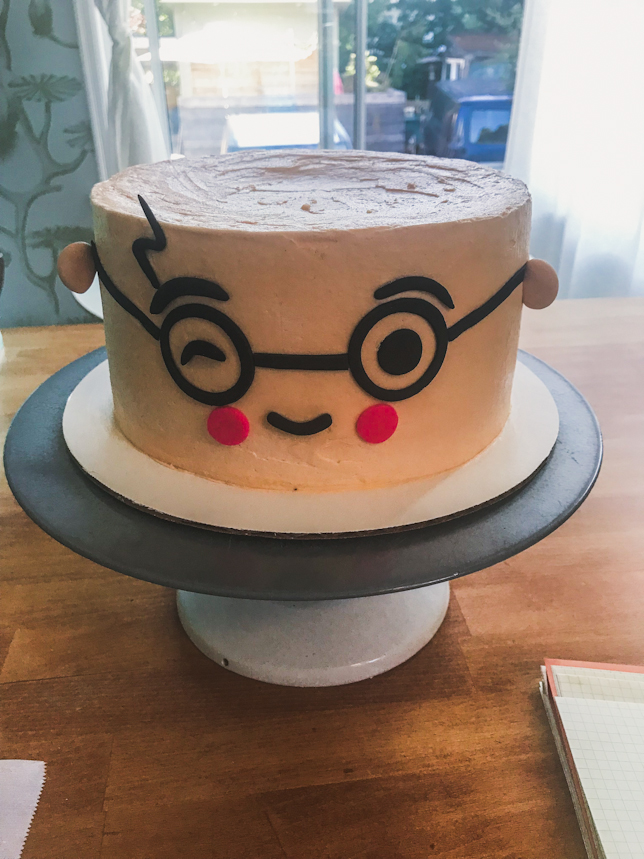 I carefully pressed the fondant pieces into the buttercream, and made teensy fondant ears anchored by wooden skewers. 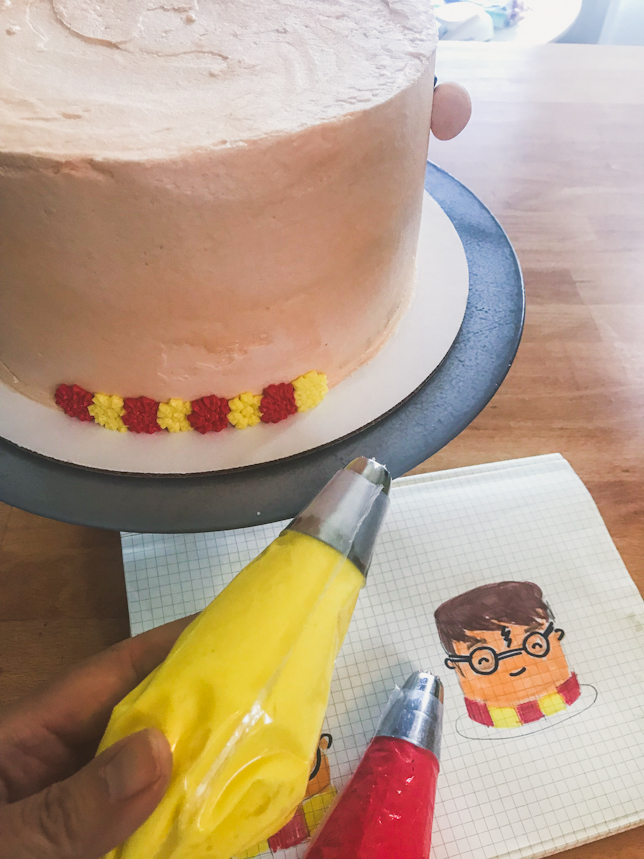 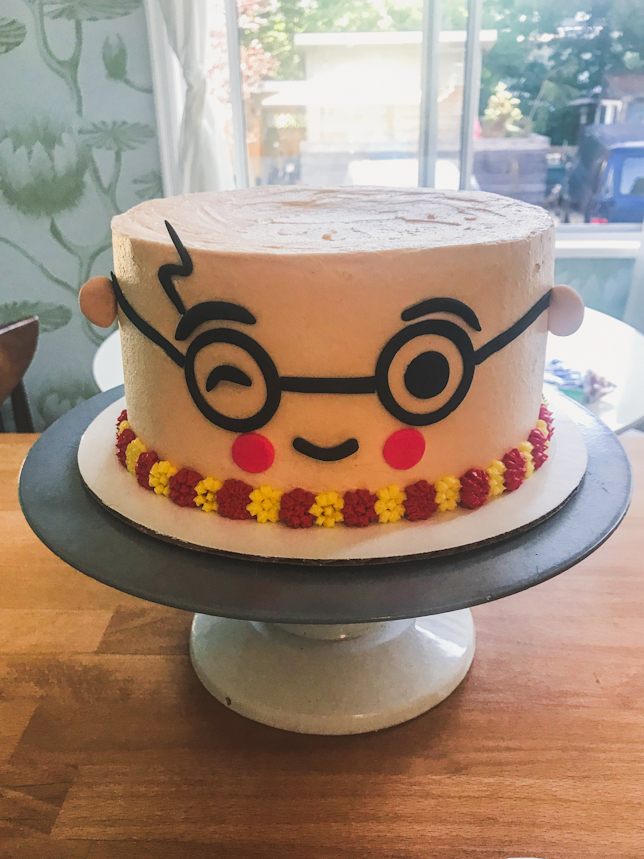 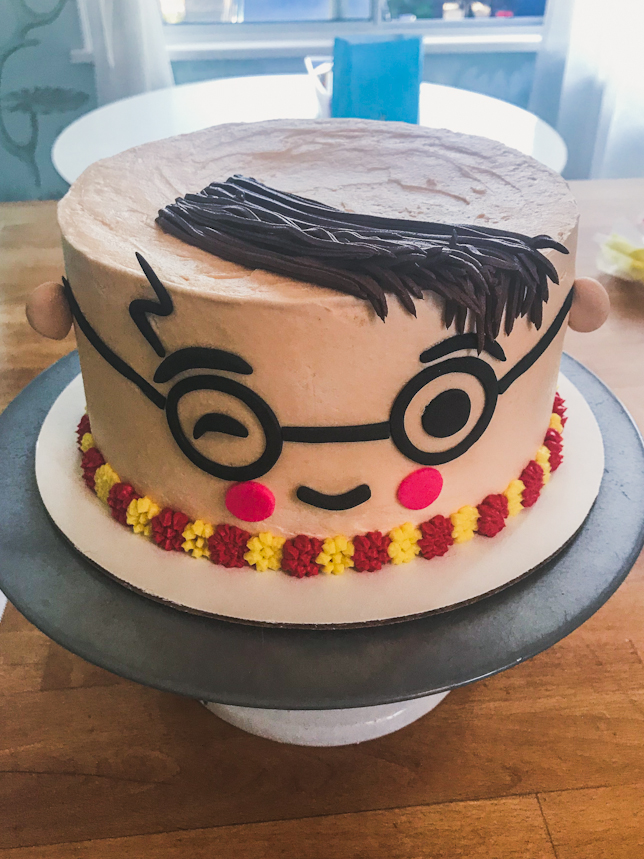 Okay, this was the part I was STRESSED about. Piping his hair with chocolate buttercream! 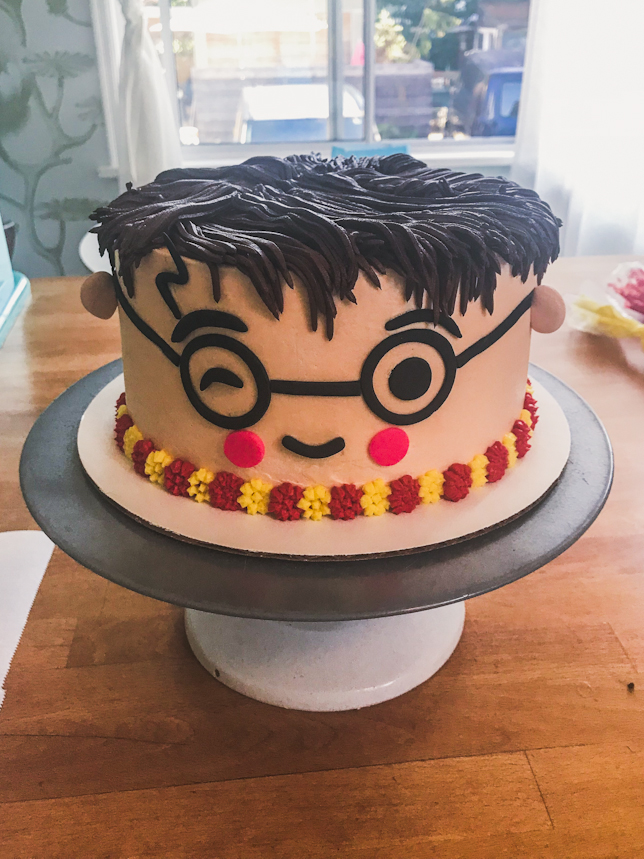 Finished!! Harry was a bit of a flat-head but he didn’t seem to mind. 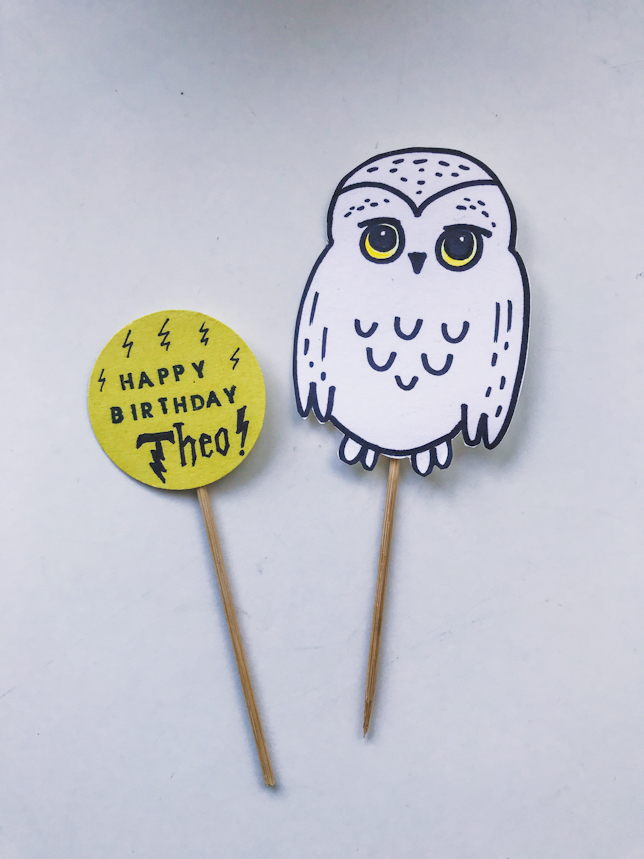 Then of course we needed Harry Potter themed cake toppers! I drew a kawaii Hedwig and my attempt at Harry Potter font for “Theo” – hehe. 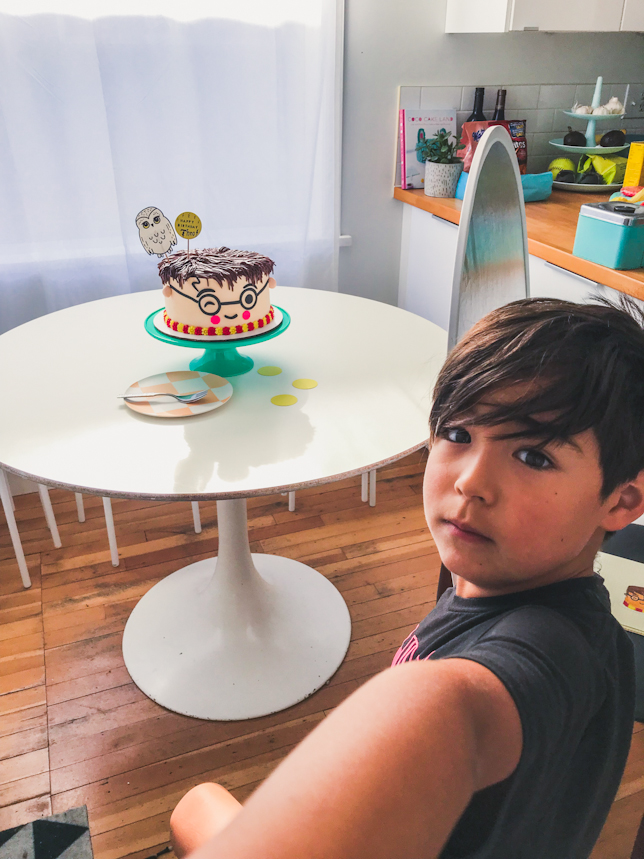 Behind the scenes of my “photo studio!” This is the closest I would let Teddy get to the cake, lol. 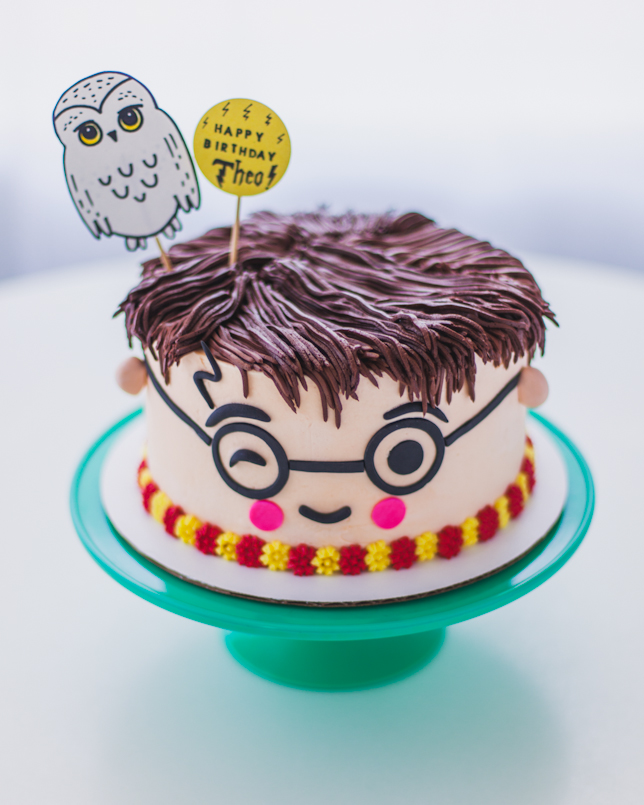 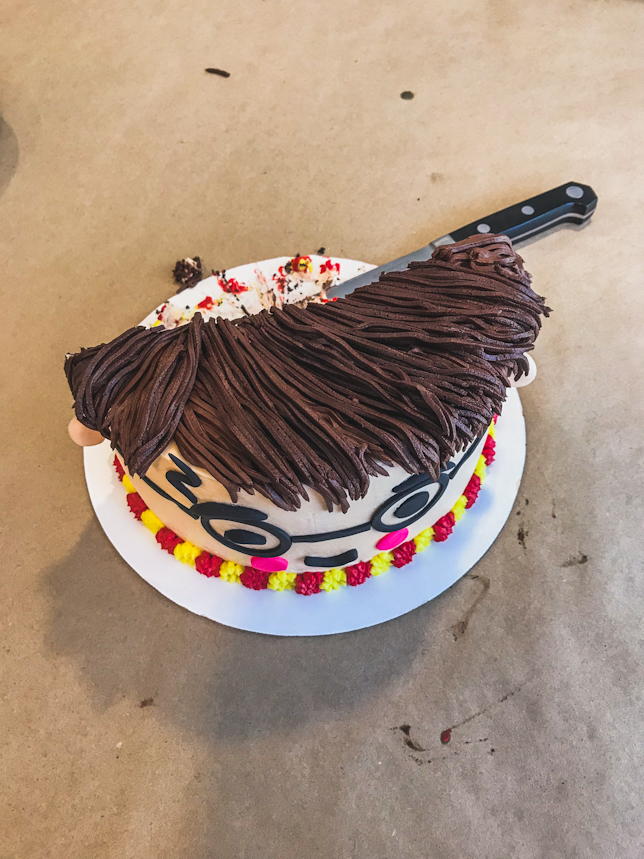 And… Harry post-surgery. It was a lot of fun coming up with this Harry Potter cake design, and my mom has already asked for it for her birthday too! Honestly I meant to post this in July but – SUMMER happened. However, back to school = back to Hogwarts – so this seems appropriate too… What’s your favourite book in the series? I think Book 7 was my favourite, though I also liked book 6 aka the Voldemort origin story. (Once again, Happy birthday Theo!!)  xo Lyndsay