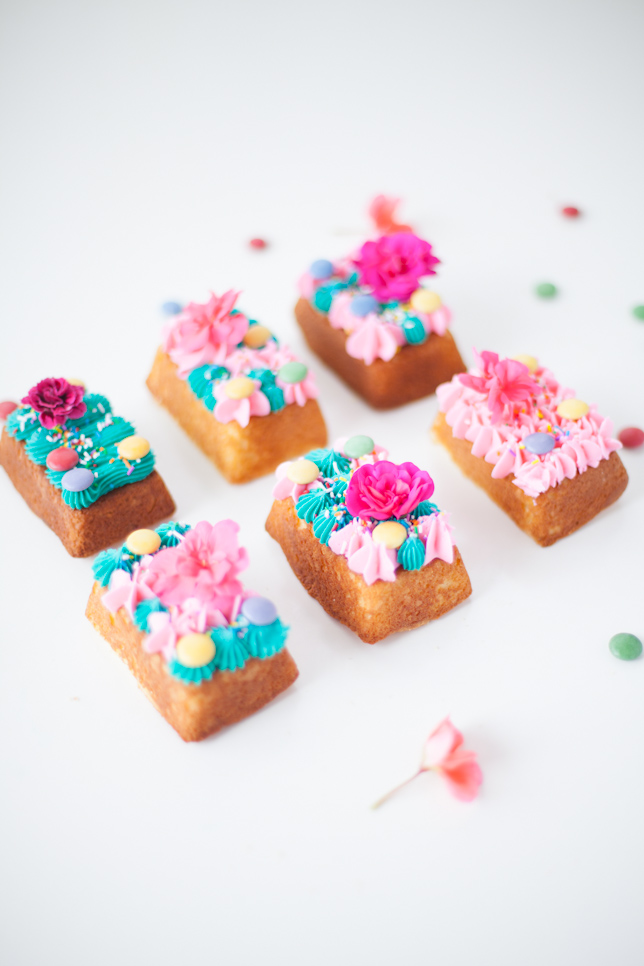 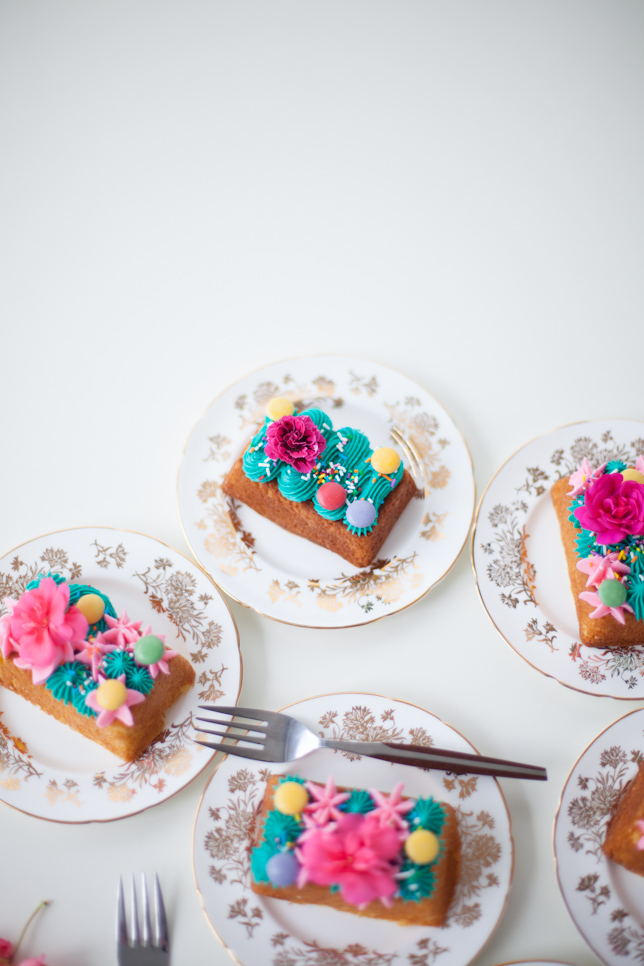 I’ve never ever used that word before – on fleek. I remember seeing it for the first time a few years ago and being like what the fugoli does that even mean. Irritated at the teens who keep updating this foreign lexicon and even more irritated at the too-old people (like me) who tried to use it. However, I have been known to be proudly, extremely late to the game. Do you even know what a VHS tape is? Yeah. Held on to those for YEARS. I still have my copy of The Hunger, starring David Bowie and Catherine Deneuve, on VHS. No VCR vessel to play it on but… I don’t even know. All I know right now is Loaf Pan On Fleek. Mini rainbow party cakes CUTENESS! 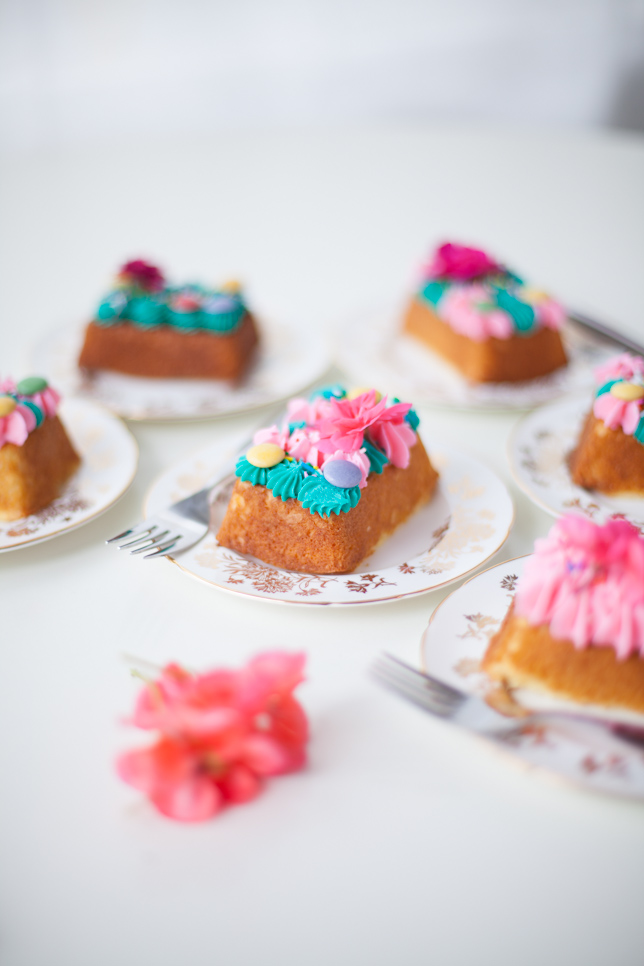 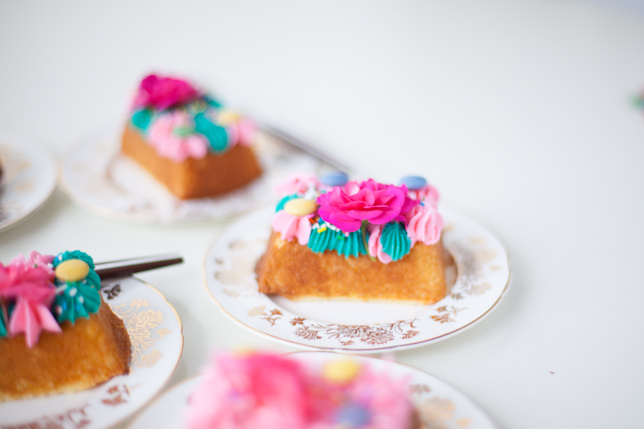 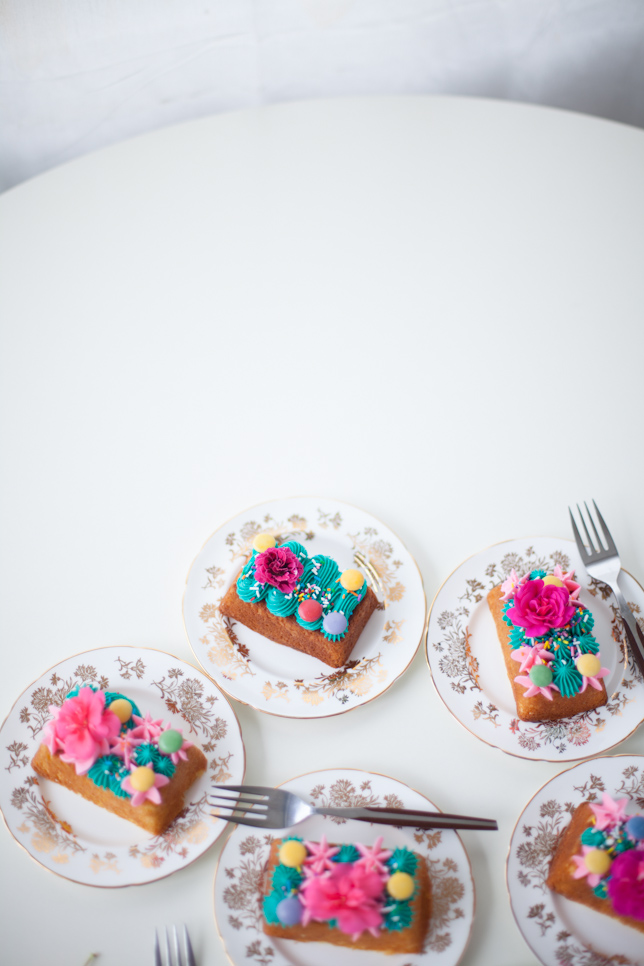 How To Make These Mini Rainbow Party Cakes:

1. Bake up your favourite cake recipe in something like this mini loaf pan. Let them cool in the pans for ten minutes, then remove and let cool completely on wire racks.

2. Whip up your favourite vanilla buttercream recipe, such as this perfectly delicious one from Style Sweet Ca; divide batch into two bowls, and colour using teal and electric pink gel colouring (or your favourite colours!)

3. Get your extra fixins’ ready – killer cute sprinkles, your favourite colourful candies and organic edible flowers, if you so wish!

5. Using a serrated bread knife, trim off the “raised loaf” portion of the mini loaf; turn over so the loaf is cut-side-down.

6. Pipe your drop stars or buttercream decorations on the top (which was initially the bottom!). Add candies, sprinkles and edible flowers for some seriously cute mini rainbow party cakes action. 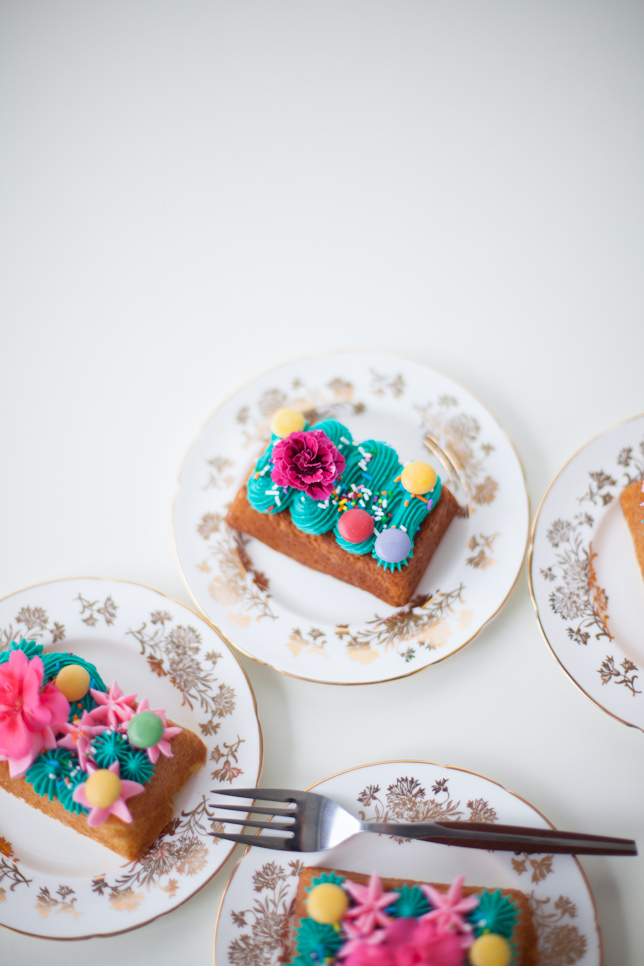 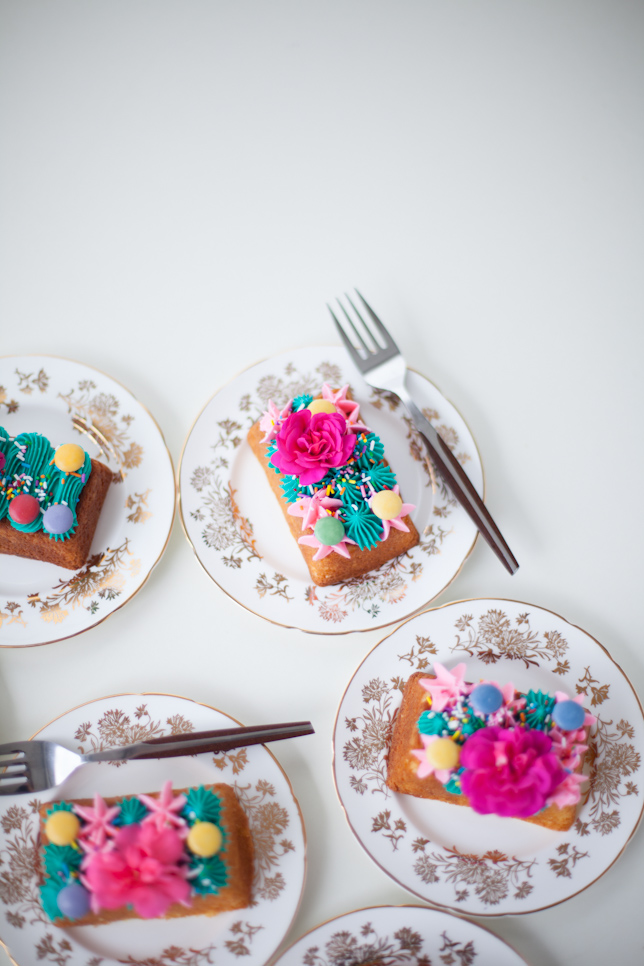 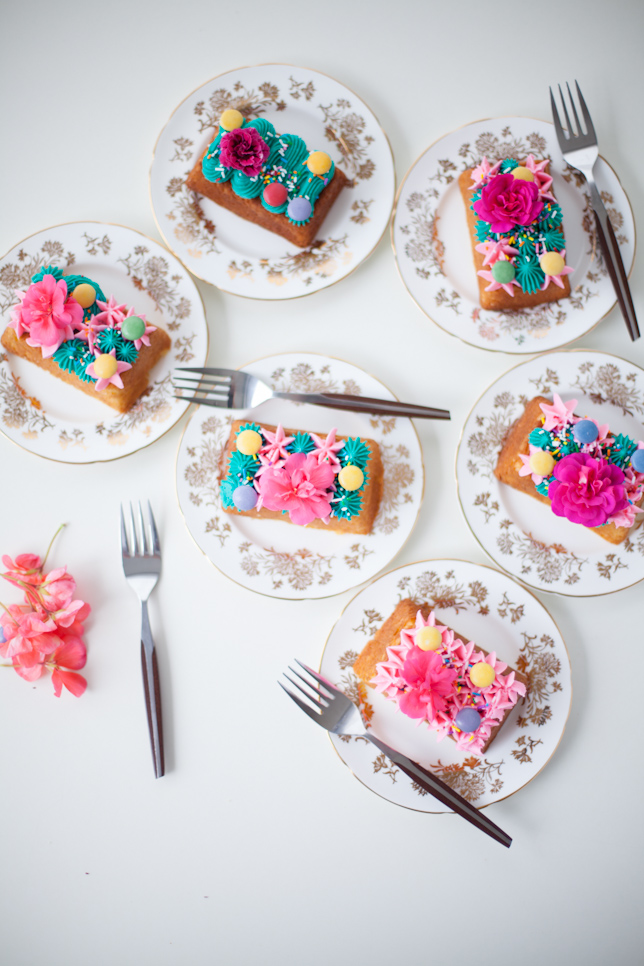 Because everyone needs to see 1400 pictures of mini rainbow party cakes.

Here they are without plates. No plates!! Can you even fathom! 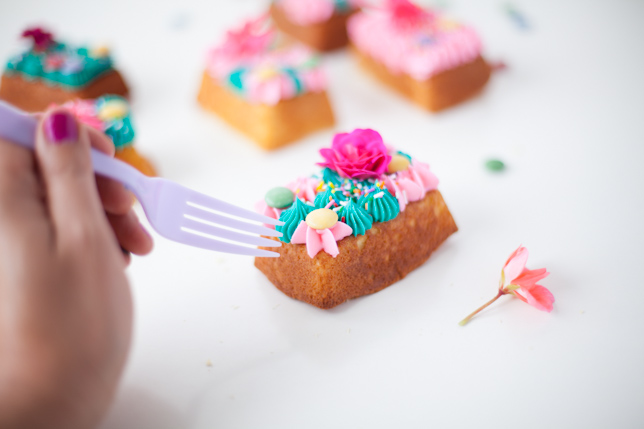 A FORK is moving in to eat one of these things!! 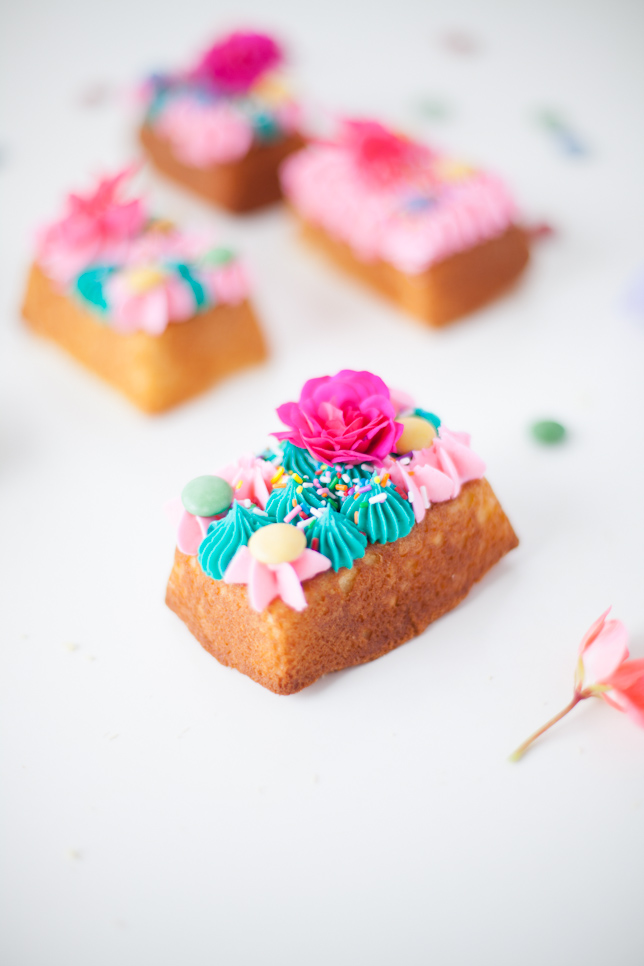 I really do love these little babies. 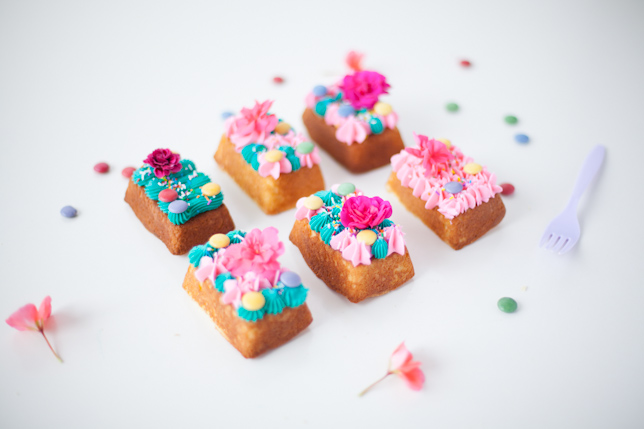 Speaking of PARTIES – my favourite party-time vibes on the interweb right now:

Little animal-faced cookies jammed into dericious-looking cupcakes? These are so CUTE.

Steph’s camping posts are making me want to lite-party in the forest, quiet camping style. Hehe.

I love anything and everything that looks like a birthday cake. Even when it’s paper.

“Princess Bakery Emulsion” makes me think of Ursula from The Little Mermaid stealing Ariel’s voice – like this emulsion is some swirly, golden essence rising out of a voice box! I know, I’m weird. BUT THIS CAKE IS SO GOOD.

Tessa is the Martha Stewart of 2016 and beyond. HONESTLY. I’m like the Chinese frumptown Guy Fieri compared to Tessa’s clean, modern and precise style and skill. Her recipe and vid for vanilla swiss meringue buttercream, well it should be in every baker’s back pocket to whip up on a dime. So delicious!

That first picture. Just put me in a Duran Duran video circa 1985 in a one piece bathing suit and POUR THIS OVER TOP IN SLO-MO. Sheesh. Sexiest looking beverage of the year. And I hate describing anything as “sexy”!

This is such a colourful and fun (DUH!) post from Kelly – grocery store cake hacks!