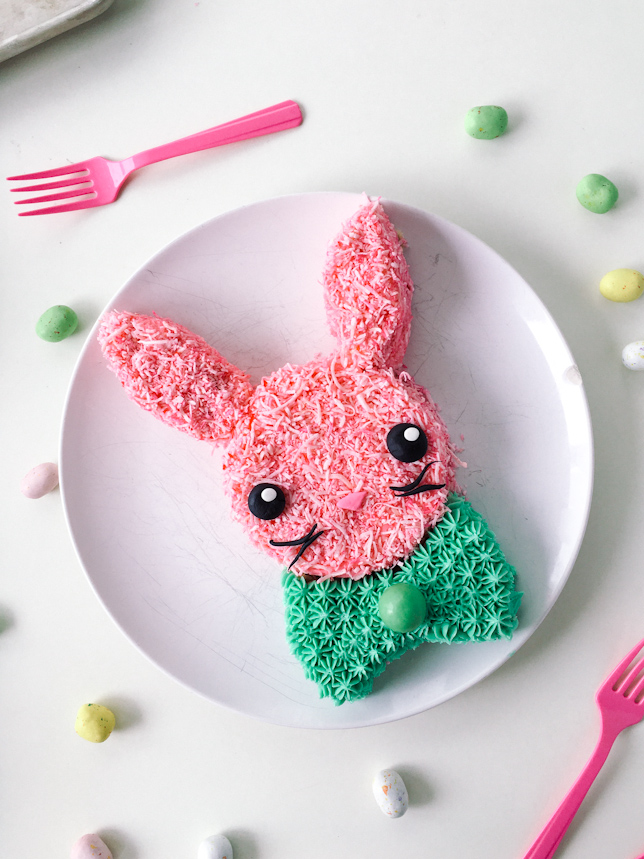 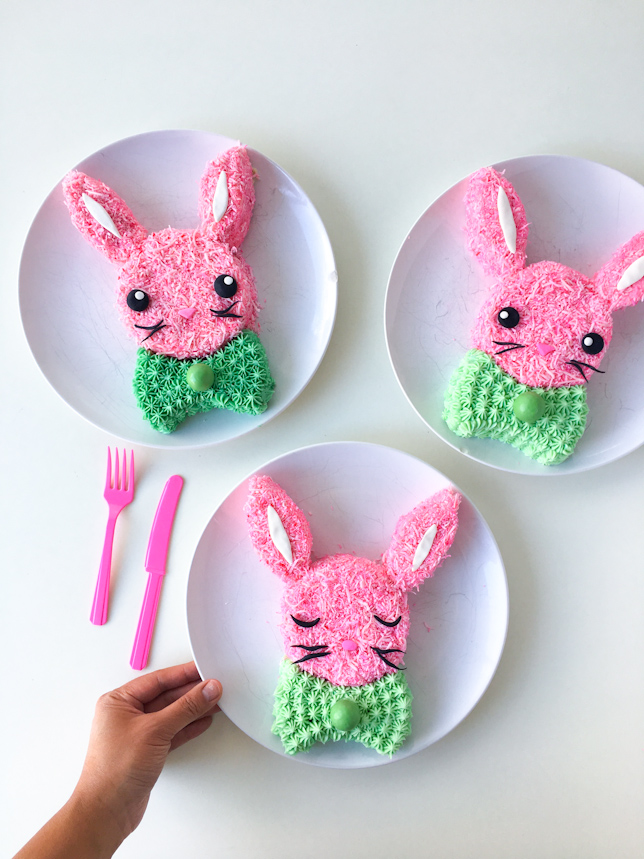 Aiyahh. How cute are these funny little pink bunny cut up cake buddies? I wasn’t sure if a sleeping bunny might be a little on the creepy side. But I rolled with it. This tutorial is going to show you a few things. One – how to colour your own shredded coconut. I’ll just tell you right now. Do you have a large ziplock bag? Do you have some pink gel food colour or regular old watery food colouring? Do you have shredded coconut? Combine all that in your ziplock bag and shake it like your life depended on it. Before you know it, you will have PINK TINTED coconut. It’s that easy, snowball. 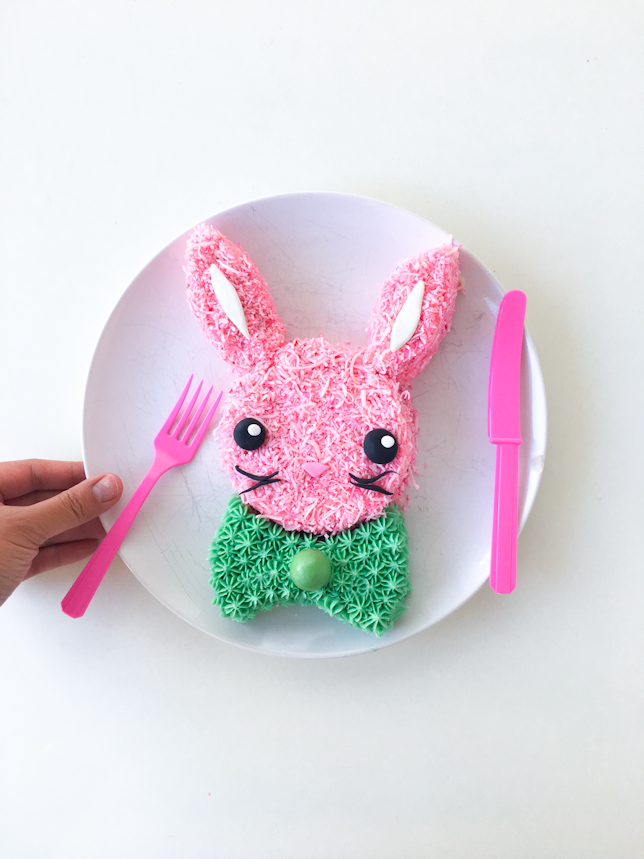 Two: how to make two round cakes TRANSFORM into the cutest (maybe too steely-eyed?) chill bunnies just relaxing on a plate, being all cool bow-tie casual. A coconut-covered bunny cake brings back both fond and hilarious memories for me  – it was my mom’s go-to cake concept in the 1980s, and my sisters and I had plenty of bunny cakes with gumdrop noses and licorice whiskers to go along with ye olde pizza parlour/bowling birthday parties. 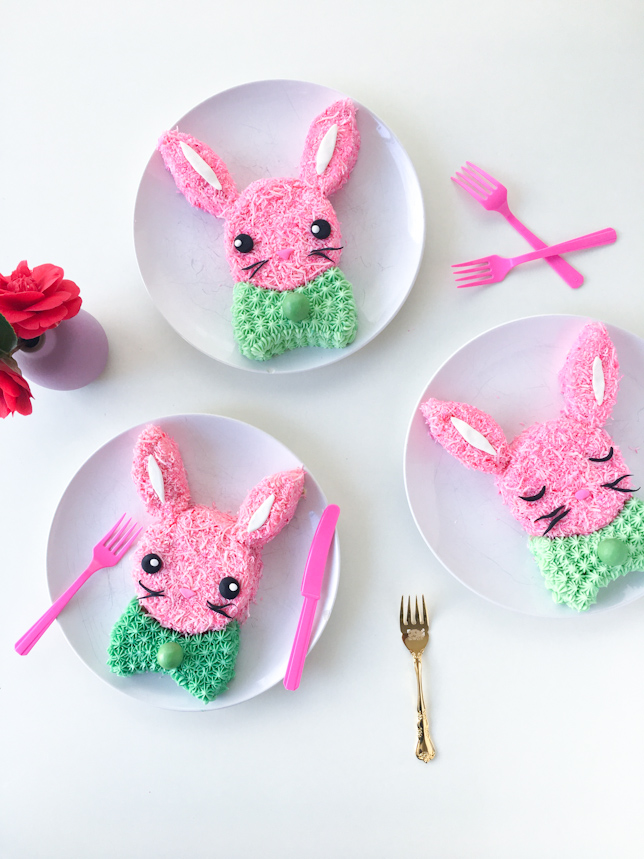 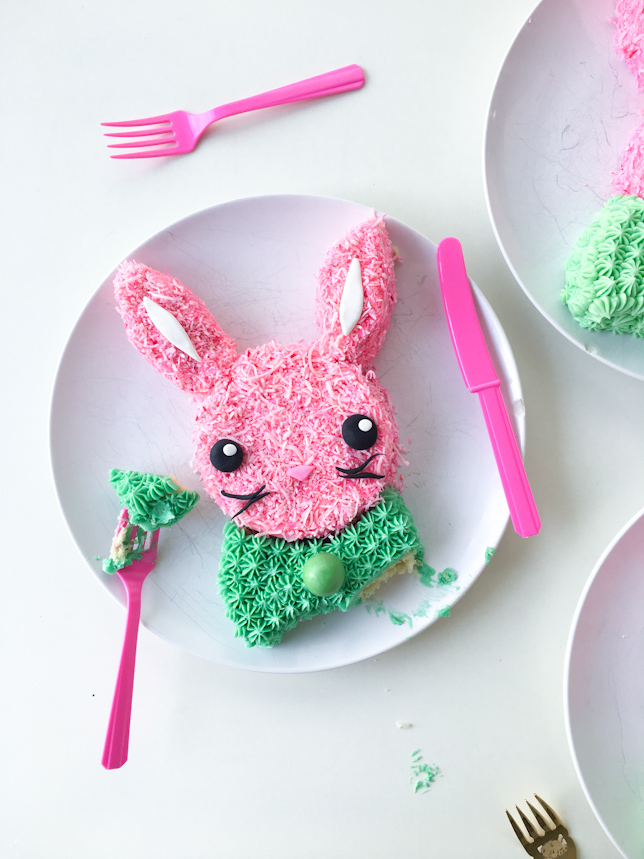 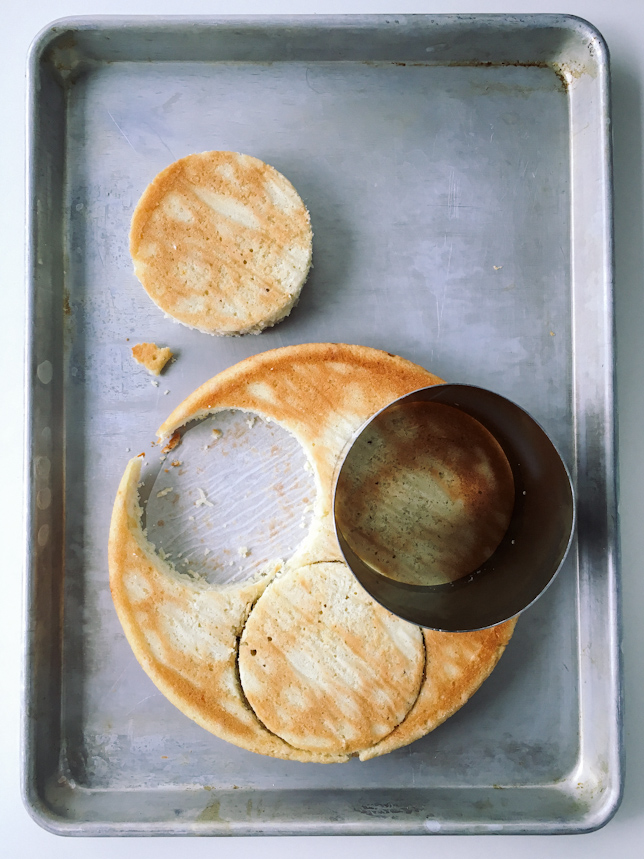 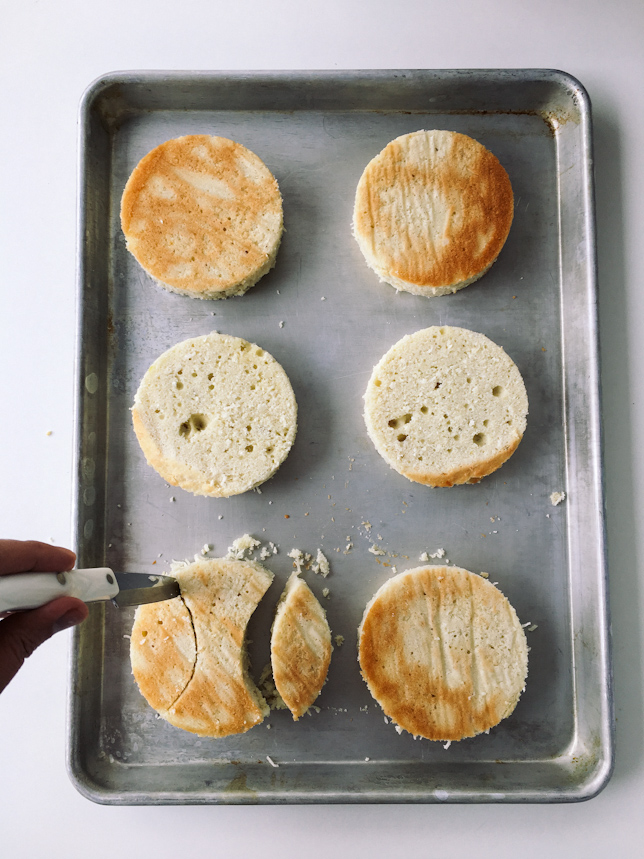 Using a sharp paring knife, cut out the bunny ears from the round cake. I cut the first bunny ear, which is the oblong leaf type shape, and stacked it on top of the other side of the cake, using the first bunny ear as a template of sorts. Then, the middle part becomes the bow tie! 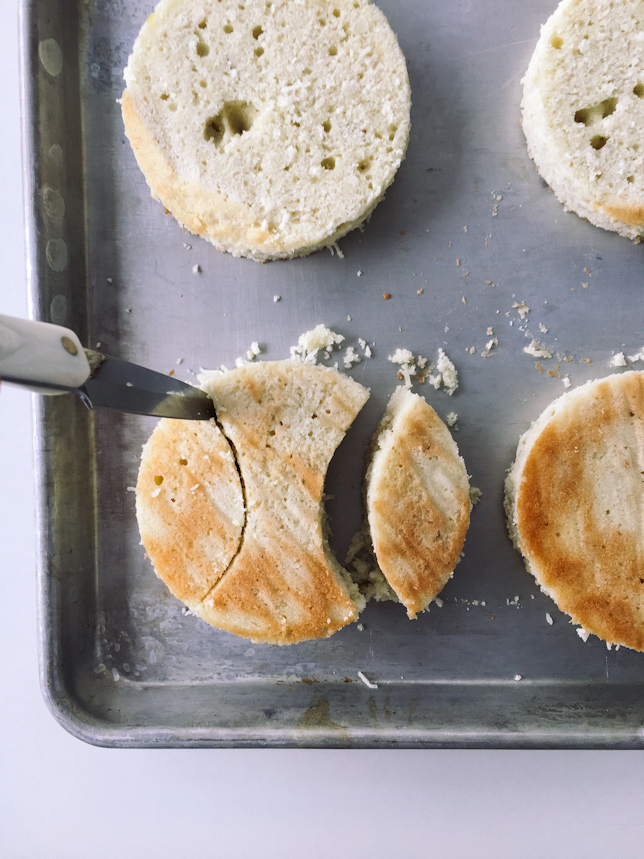 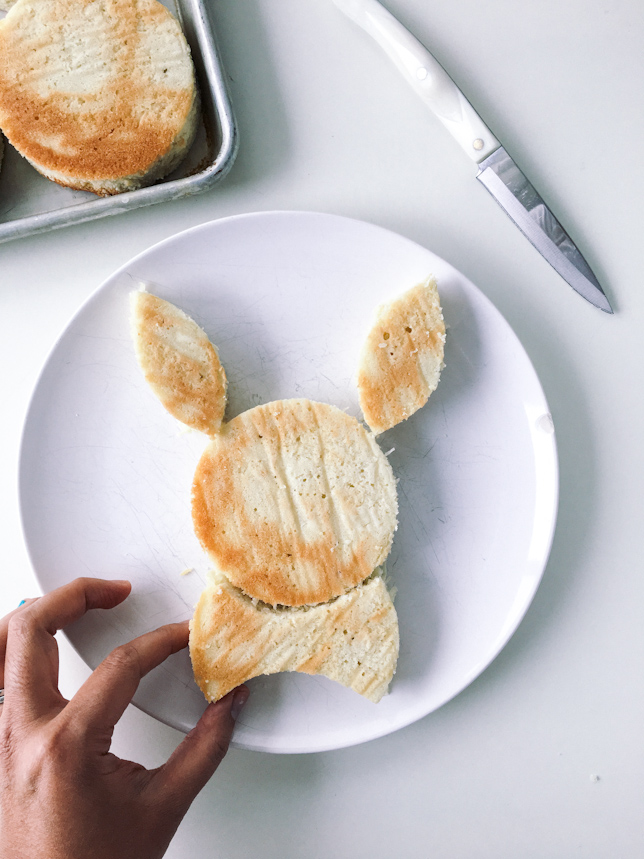 Arrange the cake on a plate with the cut-up pieces so you get the idea of the shape. 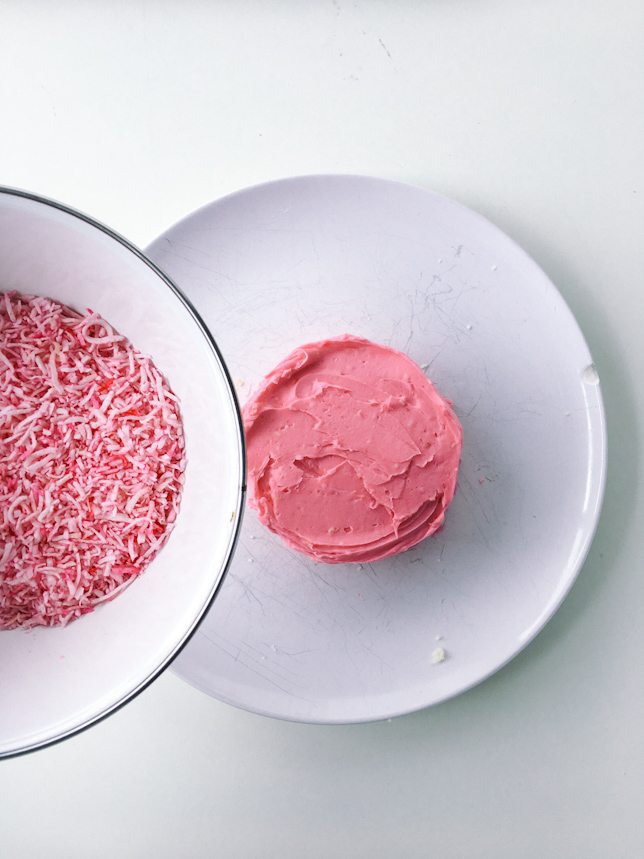 Frost the top and sides of the round cake with a good helping of pink buttercream (recipe below!). 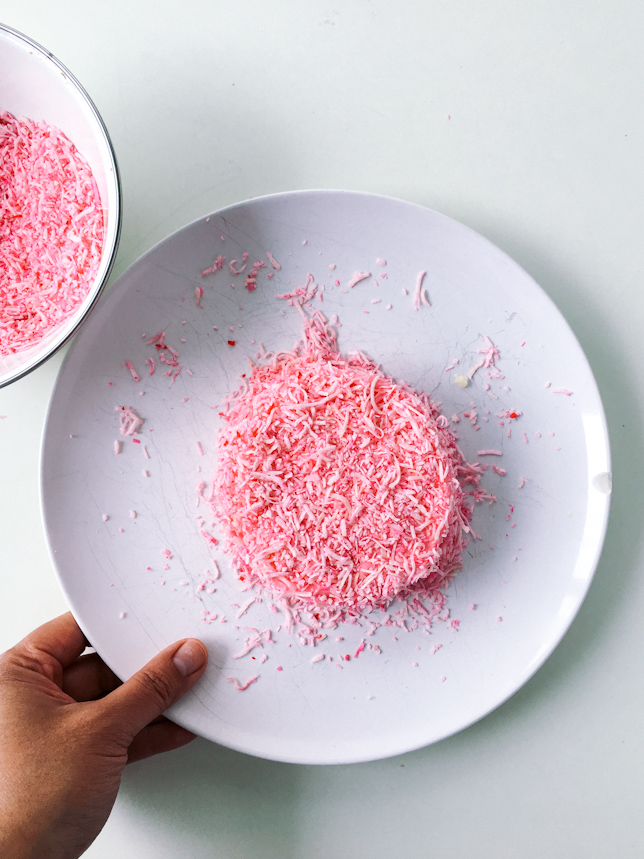 Now, cover the cake with the shredded pink coconut – I found the best way to do this was to pour the shredded coconut onto the same sized plate, then sort of “dip” or dunk the frosted cake into it, patting the coconut in with my fingers. The coconut sticks easily to the buttercream. For the sides, I rolled the cake like a wheel in the coconut and it stuck perfectly. 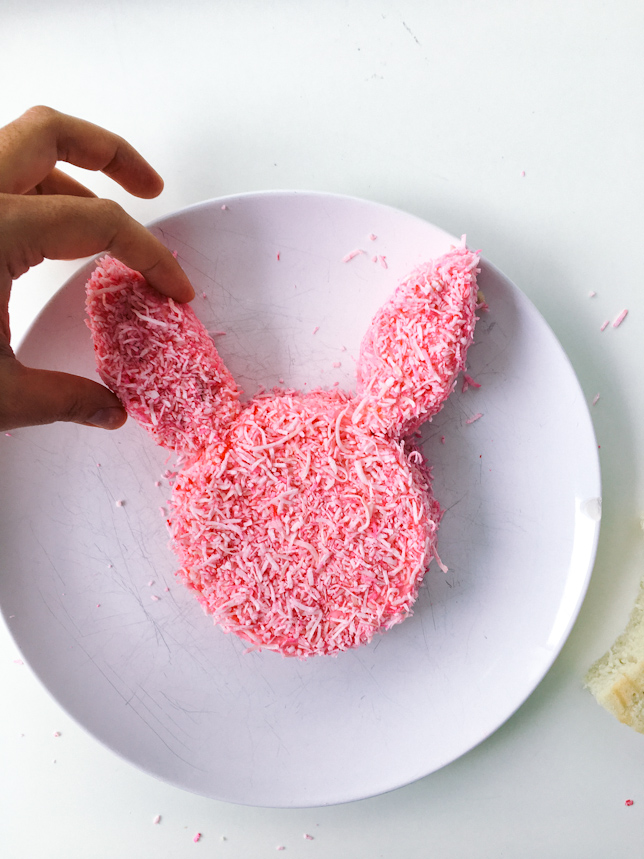 Position the bunny ears to your liking! 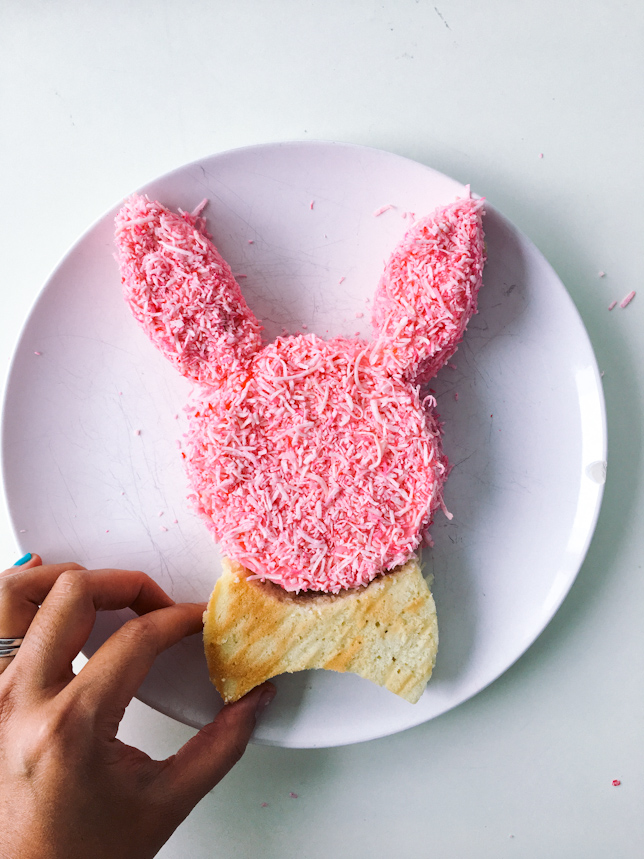 Nestle the bowtie right up in there. 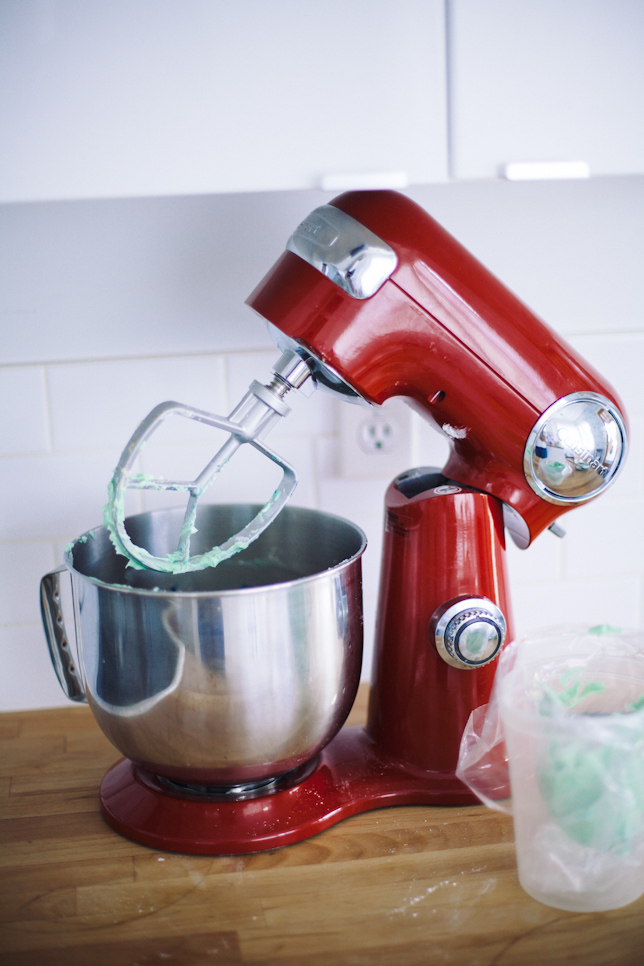 Colour the reserved vanilla buttercream a happy shade of green! (recipe and instructions below). 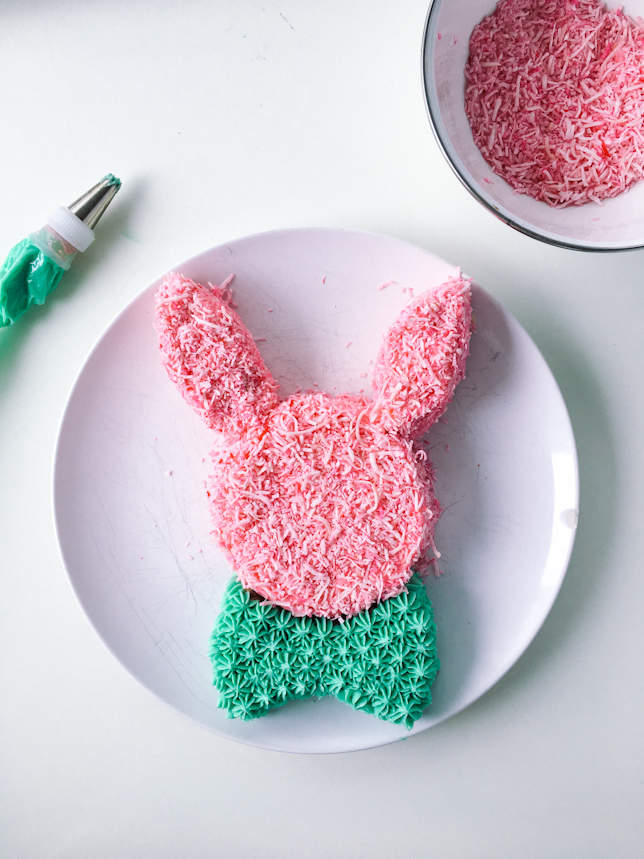 Fill your piping bag with an open star tip and pipe away! I piped the sides and top in the little drop star pattern.

I finished the bowties by placing a large malt ball candy in the centre. I used store-bought fondant for the eyes, nose and inner ears – but grocery store candies and shoestring licorice will work great too!

For the coconut cake

For the pink coconut + decor